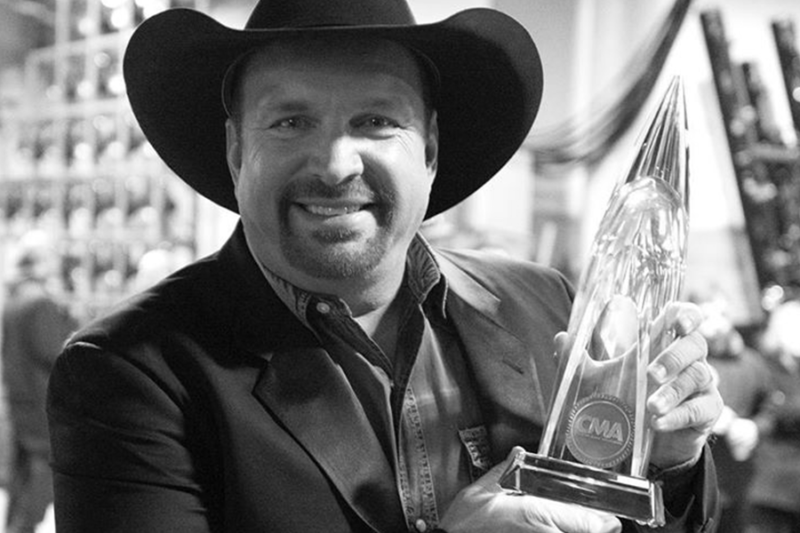 The 53rd CMA Awards Show was broadcast live on ABC on Nov. 12, hosted by Dolly Parton, Carrie Underwood and Reba McEntire.  Here are the night’s winners from Bridgestone Arena:

Entertainer of the Year

Music Event of the Year

New Artist of the Year

Album of the Year

Single of the Year

Song of the Year

Female Vocalist of the Year

Male Vocalist of the Year

Vocal Group of the Year

Vocal Duo of the Year

Musician of the Year

Music Video of the Year

Sony Music Nashville teamed up with Wrangler to put on a CMA Awards ‘viewing party’ just a few blocks down Broadway at Acme Feed & Seed.  During the party, Sony showcased some of their emerging artists, including Robert Counts, Niko Moon, Seaforth, Rachel Wammack and Jameson Rodgers.

QUESTION: Name the male country artist whose achievements include: Eleven consecutive albums that debuted at No. 1, 25 No. 1 singles, one of the highest-grossing tour in country music history, and a movie career.

Country Radio Broadcasters (CRB) has released the slate of artists for this year’s CRS New Faces of Country Music® Show voting. The nominees for 2020 are Ingrid Andress, Morgan Evans, Riley Green, HARDY, Ryan Hurd, Tyler Rich, Runaway June, Matt Stell and Mitchell Tenpenny.  The New Faces of Country Music® Show is one of the most anticipated events at Country Radio Seminar, the annual ‘industry only’ event to be held in Nashville in February 2020. Five emerging artists who have achieved significant success at Country Radio during the qualification period are selected each year to perform. The New Faces of Country Music® Show has played a pivotal role in the careers of almost every major Country star. The annual showcase was formed in 1970, making CRS 2020’s New Faces event the 50th Anniversary show. The seminar and the New Faces Show are ‘industry only’ and not open to the public.

Sometimes, good planning really does pay off.  In Chris Janson’s case it was his wife Kelly’s plans, all written down in her ‘little black book,’ according to an interview in the Nashville Tennessean. Kelly doesn’t use voice memos or her iPhone’s calendar app, preferring to keep meticulous notes in a black book. Chris’s single, “Good Vibes,” was released in February. Chris and Kelly planned to have the single hit No. 1 on the Country Radio Airplay charts at the same time as his album, Real Friends, was released. Kelly then penciled in a chart position in the corner of every Monday in her black book.  That was the chart position they believed that “Good Vibes” would need to have reached each week to achieve the goal.  They even prayed over Kelly’s little black book and kept focused on the single’s progress.  The album, Real Friends, was released October 18.  “Good Vibes” topped the Country Radio Airplay charts three days later.  “That’s all Jesus and Kelly Janson,” Chris told the Tennessean. (Real Friends entered the Country Album charts at No. 12 for the week of Nov 12.)

The annual ASCAP Awards were held Monday evening. ASCAP is a performing rights organization representing songwriters and their music publishers.  The Song of the Year Award went to Steven Battey for writing the Luke Combs hit “One Number Away.” Battey’s story is inspiring for struggling songwriters: his parents died when he was in his teens, he moved to Los Angeles and earned money as a busking street performer.  He moved to Nashville to write country music.  “One Number Away” is his first country hit and first ASCAP Award.  Adding to his achievement, he is a self-published songwriter, rather than being signed to a big publishing house.

Kentucky boy Ashley Gorley won the ASCAP Songwriter of the Year Award for the seventh time!

Hootie & The Blowfish debut at No. 3 on the Country Albums charts with Imperfect Circle, their first album since 2005 (not counting Darius Rucker’s solo albums).

Nov. 13, 1974  Dolly Parton’s “Love Is Like a Butterfly” was No. 1 on the Billboard Country Singles chart. The song led to Dolly using the butterfly as part of the logo for her Dollywood theme park.