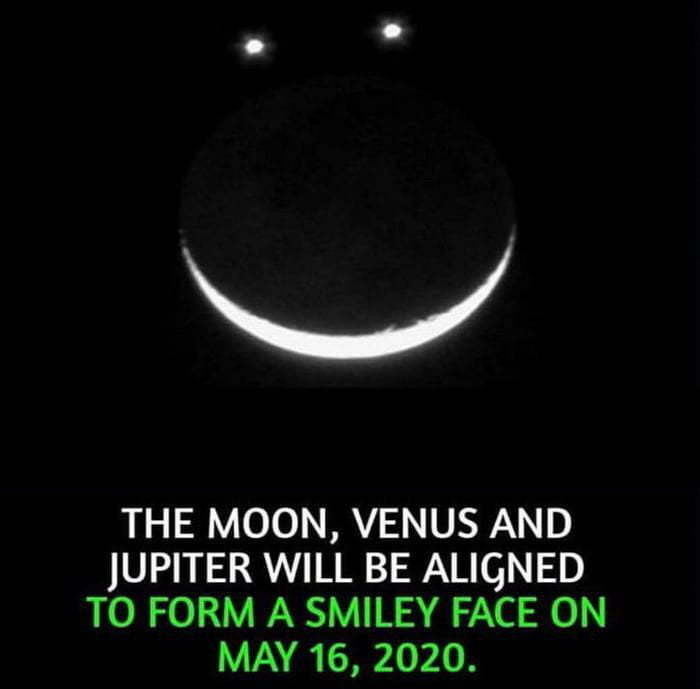 Seems like perfect timing in a world gone mad. Various internet entities including physics-astronomy.com have been hitting our social media feeds with promises of a “smiley face moon” on May 16th.

According to the article “The moon, Jupiter and Venus are going to be showing off  for us on the 16th of May 2020, by aligning in a rare position that will form a smiley face in the sky!”

However, there is no need to set your alarm to see the rare event that won’t happen again until 2065, y’all, because it ain’t happening. A fact-finding mission using more reputable outlets, such as Forbes  and double checking a couple of sky apps helped us de-bunk this mythical story.

Why? Simply put, they aren’t even the same part of the sky. So, how did this particular piece of “fake news” become so viral? Well, y’all gullibility has a lot to do with it probably, but, according to the Forbes article:

” The “story” appears to originate from story in a Philippines news outlet on May 16, 2010 about the very common occurrence of a crescent Moon passing Venus. The story was picked-up a decade later and shared by, among others, BBC Radio Tees in the UK.”

So, sorry folks. The amazing wonders of space will continue to smile down on you, just not in the way you had hoped.