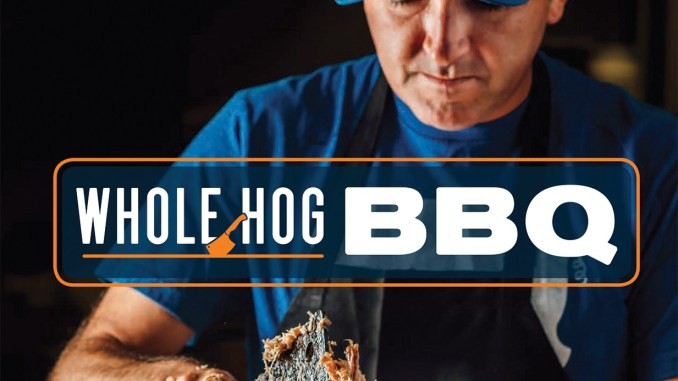 Whole Hog BBQ: The Gospel of Carolina Barbecue with Recipes from Skylight Inn and Sam Jones BBQ has just been released and y’all we couldn’t be more excited!

Sam’s grandfather, the late Pete Jones, opened the Legendary Skylight Inn at age 17 where Sam has been involved since a very early age. Skylight was founded in the summer of 1947 on fresh whole hogs being cooked over wood the same way many generations before Pete did it. Since that time, the Skylight Inn has become a standard in eastern NC barbecue. Known for its rich family history and unwavering dedication to cooking Barbecue, the Skylight Inn has stayed true to its roots.

Although Pete passed away in February 2006, his legacy and mark in Barbecue is still going strong. Skylight Inn BBQ is now operated by Pete’s son Bruce, nephew Jeff, and grandson Sam Jones who are very proud and dedicated to carrying on the legacy that Pete Jones left. The pits still smoke, and the fire burns brighter than ever.

Numerous accolades from both national and world BBQ enthusiasts have been awarded over the decades. And both a grateful President Reagan and later Vice President Bush have gushed over the family’s BBQ.

Whole Hog BBQ: The Gospel of Carolina Barbecue with Recipes from Skylight Inn and Sam Jones BBQ In the world of barbecue, Carolina-style pork is among the most delicious and obsessed-over slow-cooked meats. Yet no one has told the definitive story of North Carolina barbecue—until now. In Whole Hog BBQ, Sam Jones and Daniel Vaughn recount the history of the Skylight Inn, which opened in 1947, and share step-by-step instructions for cooking a whole hog at home—from constructing a pit from concrete blocks to instructions for building a burn barrel—along with two dozen classic family recipes including cornbread, coleslaw, spare ribs, smoked turkey, country-style steak, the signature burger, and biscuit pudding. (Amazon)

Sam’s book is available at local bookstores and online for under $20 hardcover.