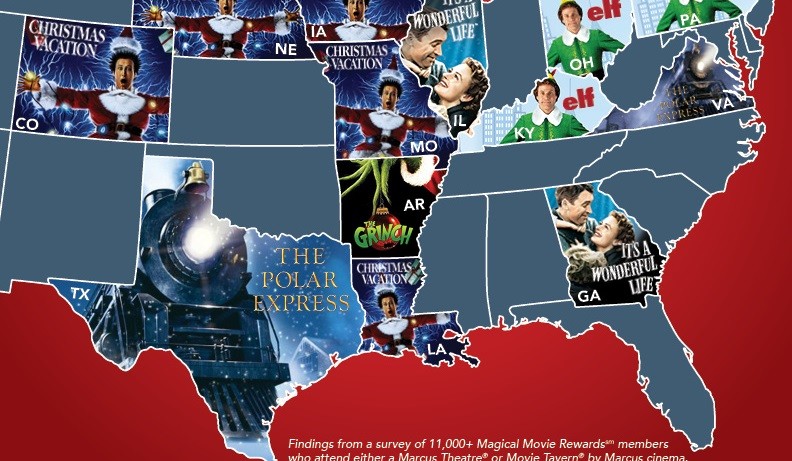 With the most wonderful moviegoing time of the year upon us, Marcus Theatres® surveyed more than 11,000 of its Magical Movie Rewards℠ loyalty members in 17 states to get their take on this year’s top holiday movies, holiday preferences and more. Survey respondents attend either a Marcus Theatre or Movie Tavern® by Marcus cinema in Arkansas, Colorado, Illinois, Iowa, Kentucky, Georgia, Louisiana, New York, Minnesota, Missouri, Nebraska, North Dakota, Ohio, Pennsylvania, Texas, Virginia and Wisconsin.

From big-budget action films to family-friendly sequels to nostalgic tributes, the holiday movie slate truly offers something for everyone. As proof, nearly half (46.27 percent) of survey respondents plan to visit the theatre four or more times between now and January 1.  Here are the movies they can’t wait to see.

“As demonstrated by this survey, going to the movies is an annual holiday tradition,” said Rolando Rodriguez, chairman, president and CEO of Marcus Theatres. “To match the added excitement and accommodate the high demand for movies like ‘Jumanji’ and ‘Star Wars,’ we’re adding additional early and late showtimes so everyone can experience the magic of the movies.”

It’s no surprise that “Star Wars: The Rise of Skywalker” topped the list of upcoming, must-see movies, but fans of the franchise were also asked to name their favorite character of all time and it wasn’t Luke.  Han Solo snagged that top honor.

Nearly 41 percent of fans indicated they are “very excited” to see the final film in the Skywalker Saga, suggesting there is an appetite for new films. However, there’s also nothing quite like a holiday classic.

That’s why Marcus Theatres and Movie Tavern bring back a collection of favorites each year during the Holiday Classics Retro Series. The 2019 line-up features six films from December 6-19 for an admission of $6 per person. Survey respondents were committed to the classics, but were split on which ones they plan to watch this year.

Top 5 Holiday Classics to See on the Big Screen

While “Elf” topped the overall list, responses on the holiday classics varied from state to state. Of the 17 states represented in the survey, seven selected “National Lampoon’s Christmas Vacation” as their top pick, five chose “Elf,” another two each chose “It’s a Wonderful Life” and “The Polar Express” and one named “How the Grinch Stole Christmas.”

Holiday PreferencesOf course, the holidays are about more than just movies. When asked about some common holiday practices, a few survey preferences were a bit unexpected: