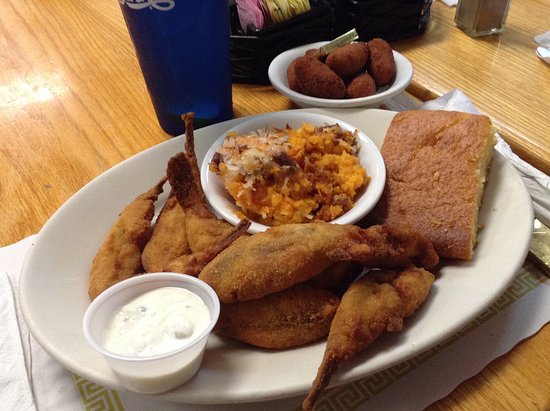 There is probably only one tiny pinpoint in a geographic area in the United States where the title of this story could appear on a chalkboard in a restaurant and the patrons entering would instantly “get it” (and order it, too).

There is no sugar in this dish, nor is it a toad.  It is a nickname for the Northern Puffer Fish and in the Chesapeake Bay area of the East Coast, it is a “bycatch” in the seafood industry, meaning that fishermen don’t set out to catch them, they just get caught up in the nets where better-known delicacies are harvested.   My father used to bring them home in the 1960s and, to we children in the family, there was always an air of excitement about eating them because they’re unique, tasty and sweet.   In this same Chesapeake Bay region, the legendary blue crab, after molting, is referred to as a soft crab.  However, as a little girl, I never heard them referred to anything other than “peelers.”  Likewise, the famed striped bass is known as “rockfish.”

It’s no wonder these homely little Northern Puffer fish have a nickname.  On Virginia’s Northern Neck, it seems that everything and everyone has a nickname.  Back in the time of printed telephone directories, the nickname of a person appeared in parentheses lest the hapless soul looking up his number did not recognize his “birth” name.  I was christened “Katherine”, however, that’s a centuries-old family name and it was never intended for me to be called Katherine, as my mother was a fan of the blond bombshell actress, Kim Novak, hence, I am forever known as “Kim.” When my sister was a baby, though her name was Leslie and I could pronounce it, I inexplicably called her “Pete” until she would answer to no other name.  My grandfather was nicknamed “Sunny” and his brother was called “Toodles.”  Our pets were usually confused when they were called because all of them had constantly evolving monikers.

Streets and roadways also have them:  Waverly Avenue is referred to as “The Wharf Road.”  Raleigh Drive was always called “The Hill.”  The town of Weems was mysteriously named “Jericho” by the Oldtimers, but nobody has ever known why and there’s nobody left to ask.    We never knew why it was called “Jericho” because it’s nothing like the Bible.  There is a small community “up the country” whose proper name is “Ottoman” but my Dad always called it “Slabtown.”  We never questioned it; we took his word as law.

One may also have noticed that double names are wildly popular in the South.  Peggy Sue, Anna Jane, Emma Marie, and so on.  It was so common when I was young that I gave all my pet cats and dogs middle names and still do.  Sons being named after their fathers gets a bit more complicated and tricky.  There’s Bobby Ray, Sr., Bobby Ray, Jr., or he could just be called, “B-Ray” or “Little Bobby Ray.”  We also knew a “Big Bubs” and “Little Bubs.”  Our Dad insists that there was once a father and son duo nicknamed, oddly, “Jaws I” and “Jaws II.”  This was before the famed 1975 Steven Spielberg movie, so leave that to your imagination.

Daddy also told us the true story of an old man he knew who never called his wife anything other than, “Honey.”  When it was time for his CPA to prepare his tax returns, he called this man and asked his wife’s name and he sputtered a bit before declaring it was “Honey.”  “No, sir,” the accountant replied, “I need her REAL name.”  With a furrowed brow, he declared, “Hon.”  “Sir, you will need to ask your wife what her name is and call me back before I can proceed.”  In the meantime, someone from the CPA’s office called the old guy’s wife and told her what was going on and she impatiently replied, “My name is Audrey!”  When the husband’s pals jokingly reminded him of this, he snapped, “I knew that; I just didn’t know how to spell it.”

Since my husband is from New Jersey and, apparently, they don’t have “the nickname problem” up there like we do down South, this has been a source of frustration for him for many years when we’ve been in social settings in the South.  For example, at our wedding many years ago, we introduced him to a cousin named “Kenneth”, but we always referred to him as “Ham.”  Later, my husband asked why we didn’t call him “Ham” to his face, and we cried, horrified, “Oh, no!  He doesn’t know that we call him that!”  He then pointed out that there were others at the wedding that we DID introduce by their nicknames (“Louie Henny” rather than “Louis Henry”, for example) so we quickly explained that some of these people know their nicknames and expect to be called by them.  Indeed, most would be insulted if you introduced them by their birth names.

Paradoxically, in a region of the country that is known for dropping “r’s” and “g’s” at the end of words, we Southerners customarily add extra syllables where they are not needed.  An example of this is one I’ve heard multiple times: “Um-ber-ella” for umbrella and “Acou-stic-al” gueetar, rather than “acoustic guitar.”  Is it that we feel pronunciation is a zero-sum game, i.e., if we giveth in one area we must taketh away in another to balance out the Universe?   Before I ponder the answer to this, I’m gon’ pull a coolah outta the boot of my car and see if there’s any sugar toads in there, waitin’ to be put in the icebox.