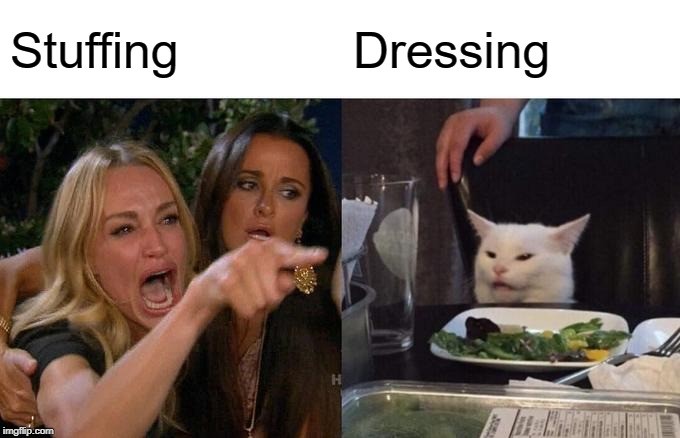 Y’all there ain’t nuthin’ worse than to ask where the stuffing is in front of some of the South’s finest ladies in a grocery store. You can almost guarantee one will pipe up with a look of admonishment and remind you that it’s not stuffing, it’s dressing.

It got me thinkin’ a couple of years ago when I was that gentleman on the other side of the chastising… What the heck is the difference?

So, using the exhaustive resources available here at the Y’all.com international headquarters, the following are the results of 100s of hours of in depth research:

Well according to Webster, who has been around apparently since 1828, stuffing is defined as:

A seasoned mixture (as of bread crumbs, vegetables, and butter) that is typically placed inside the cavity of a turkey, pepper, etc. and cooked- Source

This makes sense, as you “stuff” it into the Turkey.

North of the Mason-Dixon, stuffing is the common term whether you cook it in the bird, or on the stove, or in a casserole pan.

In Pennsylvania, as an interesting side note, they mix theirs with mashed potatoes and call it “filling”.

In the South, if the word “stuffing” is used, it is preferred to be pronounced without the “g” . The correct pronunciation being “stuffin”.

Again, I went to Webster, and this is the definition of dressing:

Now, I looked at that and again, made sense. And , thought ” They are the same”. So, I started asking around. Dug deeper into my research, and found that in fact in proper Southern households, talking of “stuffing” is prohibited.

Why? It’s just an improper term to speak of stuffing something at the dinner table. It’s just a crude word. “Whutcha doin’? ” “Stuffin’ the bird” , just doesn’t properly roll off the tongue like “Makin’ cornbread dressing”.

And, since whether you cook it in or out of the bird, it is served on the side , as a “dressing” piece to the bird.

However,despite the South’s affection for dressing, often times in those states it’s also called stuffing. According to Epicurious, the only states that searched for dressing recipes over stuffing recipes were Alabama, Louisiana and Mississippi. Stovetop has been blamed for this anomaly.

Technically, both stuffing and dressing are correct in their interpretations. And, by logical analysis of Mr. Webster’s definitions we see that stuffing is always dressing, but dressing may not always be stuffing.

So, who is right? Go find ma or grandma. Ask her politely if she prefers stuffing or dressing. If she smacks you in the head with a wooden spoon for using the word “stuffing” y’all will have your answer.

Most importantly, be thankful for the day and the company. Enjoy your Thanksgiving y’all!