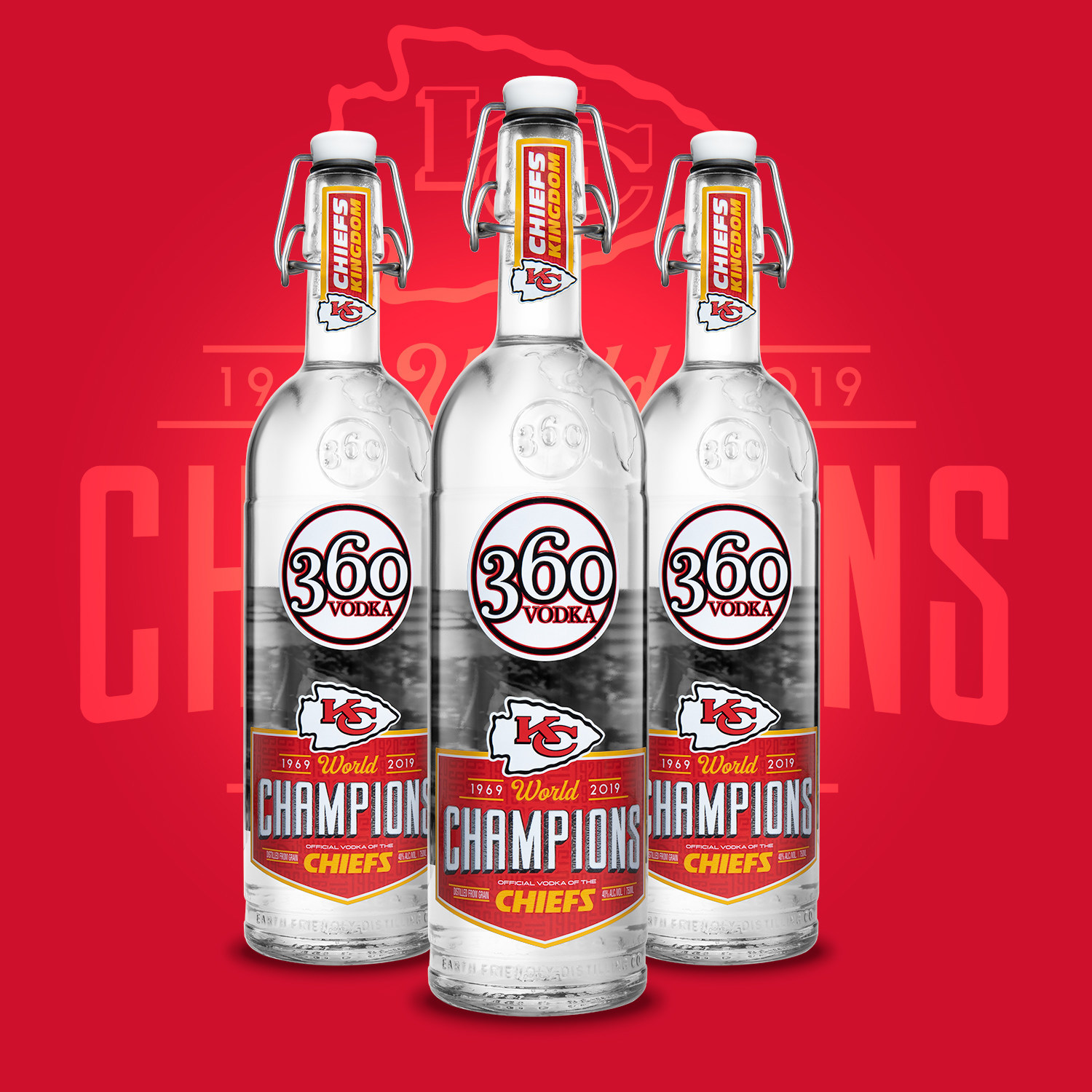 Missouri-based 360 Vodka has released a Limited Edition 360 Vodka Chiefs commemorative bottle in honor of the reigning World Champion Kansas City Chiefs. 360 Vodka is the Official Vodka of the Chiefs and is proud to celebrate a milestone 50 years in the making.

The partnership between 360 Vodka and the Chiefs kicked off in August 2019. A co-branded bottle celebrating the team’s 60th anniversary was released and signature 360 Vodka cocktails were introduced throughout Arrowhead Stadium. Fan favorites included the 360 Showtime, a twist on a classic cherry limeade, and a BBQ Bloody Mary crafted with 360 Barbeque Flavored Vodka.

360 Vodka is a premium brand of McCormick Distilling Co. in Weston, Missouri. Founded in 1856 and home to the historic Holladay Distillery, McCormick Distilling Co. is the oldest business in the Kansas City area. This is not the first time the company has celebrated a world championship with the Chiefs. McCormick introduced a commemorative bourbon decanter following their first win in 1969.

“Seeing the way Kansas City came together to celebrate the Chiefs’ historic Super Bowl win was an incredible thing,” said Mick Harris, President, McCormick Distilling Co. “Since then, we’ve seen the city come together in an entirely different way, supporting healthcare workers and first responders and doing all we can to help out in our local communities. We are very proud to be a part of Chiefs Kingdom and a partner of the World Champion Chiefs.”

All 360 Vodka bottles are made of recycled materials and feature swing-top closures. Through the company’s “Close the Loop” program, a donation is made to a local charity for every swing-top that is returned to the distillery. Given the challenges presented by this unprecedented year, 360 Vodka will direct all 2020 “Close the Loop” donations to Harvesters, a regional food bank providing food and related household products to more than 760 non-profit agencies in Missouri and Kansas including emergency food pantries, community kitchens, homeless shelters, and others.

The 360 Vodka Chiefs World Championship bottle is hitting shelves this week. The label design will celebrate the 2019 season and the bottle will be available throughout Chiefs Kingdom with retail placements in Missouri, Kansas, and Nebraska.