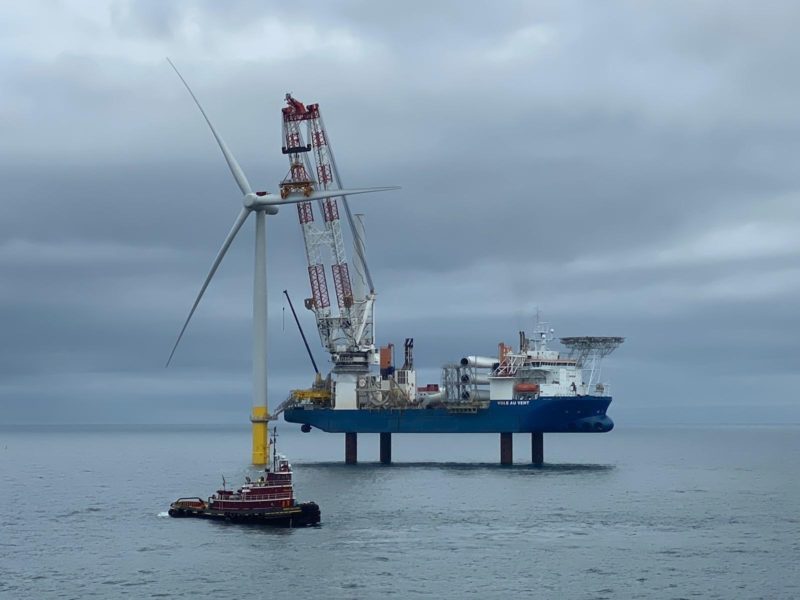 Dominion Energy announced today the successful installation of the two turbine, 12-megawatt Coastal Virginia Offshore Wind (CVOW) pilot project 27 miles off Virginia Beach. The first offshore wind farm to be approved by the Bureau of Ocean Energy Management (BOEM) and installed in federal waters, and second constructed in the United States, was built safely and on schedule despite the worldwide impact from the coronavirus pandemic. The turbines will now undergo acceptance testing before being energized later this summer and producing enough clean, renewable energy, at peak output, to power 3,000 Virginia homes.

Dominion Energy will apply the valuable permitting, design, installation and operations experience from the pilot project to its proposed 2,600-megawatt commercial project. That project, which is the largest announced offshore wind project in North America, is on track to commence construction in 2024, and upon completion, will provide enough renewable electricity to power up to 650,000 homes.

Several Virginia-based companies contributed to the CVOW pilot project and Dominion Energy remains committed to creating the expertise to position Hampton Roads to be a supply chain hub for U.S. offshore wind efforts and create thousands of clean energy jobs in Virginia.

“The construction of these two turbines is a major milestone not only for offshore wind in Virginia but also for offshore wind in the United States,” Dominion Energy Chairman, President and CEO Thomas F. Farrell, II said. “Clean energy jobs have the potential to serve as a catalyst to re-ignite the economy following the impacts of the pandemic and continue driving down carbon emissions.”

“This project propels Virginia to national leadership in America’s transition to clean energy,” said Governor Ralph Northam. “It’s also shaping a new industry that will bring thousands of new clean energy jobs to Virginia. By working together, Virginia is shaping an investment that’s good for workers, good for business, and good for the American economy.”

Ørsted, the largest offshore wind developer in the world, is serving as the offshore engineering, procurement and construction lead for the project. The Denmark-based company has invested in the Port of Virginia. The L. E. Myers Company with members of the International Brotherhood of Electrical Workers, performed the onshore construction work.

“We are immensely proud of the work our teams and suppliers were able to complete under unprecedented circumstances,” said Thomas Brostrøm, CEO of Ørsted North America Offshore. “These two turbines are another monumental step for offshore wind in the U.S. The future remains bright for this new American industry.”

The pilot project was first announced three years ago and received Virginia State Corporation Commission approval in November 2018. Onshore construction of the electrical interconnection facilities and the half-mile conduit which holds the final stretch of cable connecting the turbines 27 miles off the coast to a company substation near Camp Pendleton commenced last summer and was completed earlier this year.

Customers will see no increase in rates for the pilot project under the provisions of the Grid Transformation and Security Act of 2018.

Survey and geotechnical work continues on Dominion Energy’s 2.6 gigawatt full-scale wind development. These surveys will support the development of the project’s Construction and Operations Plan to be submitted to BOEM later this year. Dominion Energy named Siemens Gamesa Renewable Energy (SGRE) its preferred wind turbine supplier for the project earlier this year and SGRE announced the project will use its new SG 14-222 DD turbine for the project. In total, approximately 180 of the more than 800-foot-tall wind turbines are expected to be deployed in the project. SGRE is considering major investments in Hampton Roads as well as other states to support the US offshore wind industry.