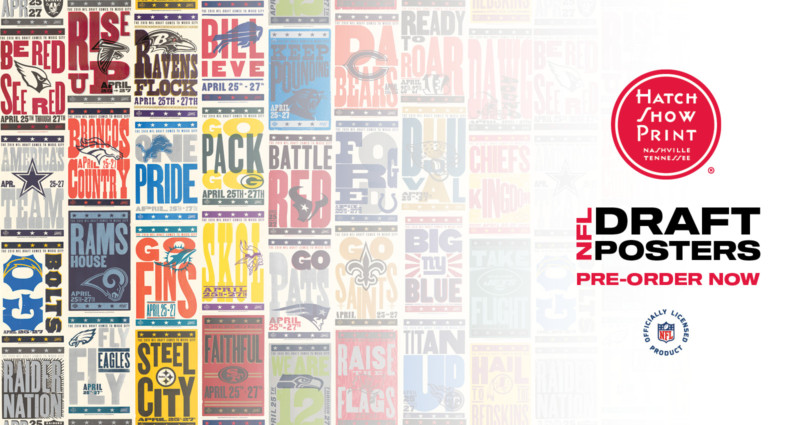 Hatch Show Print, the historic, 140-year-old Nashville letterpress print shop, announced today it will sell limited quantities of the letterpress posters it created for each of the NFL’s 32 teams for the 2019 NFL Draft. The posters are only available through pre-order via the Hatch Show Print website, www.HatchShowPrint.com.

Late last year, the NFL commissioned Hatch Show Print to develop custom posters for the 2019 NFL Draft. Each poster was designed specifically with each team’s fan base in mind. Hatch Show Print’s team of designer/printers worked directly with the NFL and researched each of the 32 teams to gain an understanding of who the team is and who they represent. Team slogans, logos and history were all incorporated into the designs.

The Hatch Show Print team, led by Associate Director Celene Aubry, pulled from its extensive collection of wood type, ranging in size from half an inch to sixteen inches, to create these posters that celebrate the NFL through typography-driven design. For each poster, the shop’s team of designer/printers set the wood and metal type by hand, and produced the work on 50- to 100-plus-year-old printing presses.

“To be able to tell the story of each team and their fans through a Hatch Show Print poster is something that is unique and truly Nashville,” said Aubry. “It’s really gratifying to experience the excitement fans everywhere have for something we make with our hands, using materials that have passed through five generations of designers and printers working in this shop.”

Hatch Show Print posters were prominently featured throughout the NFL’s creative kit for a NFL Draft that broke records in both attendance in Nashville and television viewership.

“It’s been amazing to see how these custom Hatch Show Print team posters from the NFL Draft have resonated with fans, whether they were on the ground in Nashville, or simply viewed on television or social media,” said Julie Haddon, NFL Senior Vice President of Global Brand and Consumer Marketing. “The design of these posters captured the spirit of Nashville while uniquely reflecting each team. We’re thrilled that we were able to continue our work with Hatch Show Print to deliver NFL fans with a keepsake from one of the most entertaining and memorable NFL Draft experiences in recent history.”