In 1992, historian James C. Cobb famously called the Mississippi Delta “the most Southern place on earth.”  Immortalized by William Faulkner in the story “The Bear,” centuries-old forests and American black bears once covered the roughly 200-mile floodplain stretching from northwest to central Mississippi. By the end of the Reconstruction era, however, the Delta had become synonymous with its flat, fertile farmland. The Delta receives international acclaim as home to blues legends like Robert Johnson, as well as some of the best Southern comfort food in the country.

Restaurants like Doe’s Eat Place in Greenville have been featured everywhere from the New York Times to the late Anthony Bourdain’s Parts Unknown. A Doe’s franchise in Arkansas also brought fame to the regional chain when it served as the venue of Hunter S. Thompson’s 1992 Rolling Stone interview with Democratic nominee Bill Clinton. From north to south down Highway 61, the Mississippi Delta is filled with other historic restaurants and obscure places that don’t receive the same level of attention.

In 1985, activist Jesse Jackson called the poverty-stricken town of Tunica in the Upper Delta “America’s Ethiopia.” Now known for its casinos, Tunica also has two landmark Mississippi restaurants. The Blue & White Diner, located in a Pure Oil gas station, has served residents since 1924. Locals love it for the classic lunch and breakfast plates, especially stacks of homemade hotcakes. The Hollywood Café, open since 1969, offers delicious Southern staples like pecan pie and fried okra (not to mention they invented the fried pickle). Its walls are covered with memorabilia related to Delta farming, and blues artists like Son House played at the site when it was a plantation.

Travelers know Clarksdale, right down Highway 61 from Tunica, for Morgan Freeman’s Ground Zero Blues Club and the annual Juke Joint Festival celebrating artists like Muddy Waters. Historic sites like the sharecropper’s shack where he lived from age three until his move to Chicago is just outside of town. The home was moved, but another abandoned house and the fields that surround it remain intact. Twenty minutes from Clarksdale, the Statue of Liberty stands in Marks, Mississippi in Ty Gurley’s roadside collection of statues.

Many recommend Ground Zero and Levon’s, but local businesses like The Messenger Pool Hall are also worth supporting. In a 2015 article, Clarksdale native and writer Addie Citchens called it the town’s “oldest continually-running business.” The cash-only menu changes daily to weekly, and the bar sells domestic beer. Locals are always in the game room, smoking and passing time. According to Citchens, owner George Messenger’s grandfather opened the restaurant in 1910. It moved to its current location in the heart of the New World in the 1940s. The New World was a thriving black business district, now known for sites like the hotel where Empress of the Blues Bessie Smith died in 1937.

Just under an hour south, Cleveland stands out for its excellent small university Delta State. A short drive from the college, the preserved buildings at former plantation Dockery Farms make up one of the most important sites on the Mississippi Blues Trail. Robert Johnson, Charley Patton, and Howlin’ Wolf all lived at Dockery at one point. The gas station that served the massive plantation on the Sunflower River stands at the entrance, with original Coca-Cola signs. After visiting the abandoned juke joint Po’ Monkey’s in Merigold, travelers can enjoy the view of historic downtown Cleveland with a gin and tonic at the rooftop Bar Fontaine.

Another hour south in Greenwood, the gravesite of Robert Johnson is behind a small church. Not far from Mt. Zion, the historic black neighborhood Baptist Town was the last-known residence of the mysterious Johnson, and crumbling buildings from the early twentieth century that he knew still stand. An hour west in Greenville, a cypress preserve offers a look at how the Delta appeared in the nineteenth century. Better yet, the original Doe’s Eat Place is just a few miles away. Doe’s is known for filets and tamales, but the shrimp broiled in spices and herbs is equally good. A thirty-minute drive to Lake Washington reveals the antebellum ruins of St. John’s Episcopal Church and Mount Holly Plantation.

The rural communities north of Vicksburg contain many of the region’s strangest places. Hundreds lived in the “ghost town” Nitta Yuma, outside Rolling Fork, but the estimated population is now 20. Residents preserved antebellum buildings, a gas station from the Progressive era, and the state’s largest antique doll collection (the last of which the author happily avoided). Visitors should see Mont Helena, a Gilded Age estate garishly placed on a Native American ceremonial mound, and a marker where President Theodore Roosevelt hunted and observed wildlife. An honorable mention is folk artist Lee Washington’s gallery and store, filled with pieces made from antique farming equipment.

Due to its Civil War history, Vicksburg is the perfect southernmost end point for a trip through the Delta. Following Highway 61 South from Rolling Fork leads to the Vicksburg National Military Park, antebellum architecture, and cemeteries. The memorial arch at the entrance to the park is historic in itself, as it was dedicated in 1920. Travelers can also find The Tomato Place, a shack filled with produce, Cajun food, and every tomato sandwich known to man, just off the side of the road.

While landmarks like Doe’s Eat Place are institutions, other sites in the Delta are rapidly deteriorating. In 2019, the Mississippi Heritage Trust named Po’ Monkey’s one of the state’s most endangered historic places. Bolivar County news reports that it could be moved, but its future is uncertain. Writer Addie Citchens claims that in the face of the Delta’s many racial and economic issues, juke joints like The Messenger and Po’ Monkeys represented joy and “escape – albeit temporary.” Without a clear structure in place for preservation, a piece of Southern history could be lost. 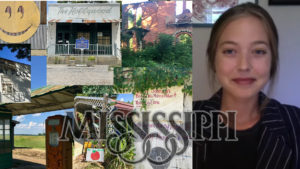