There is a Slight Risk of excessive rainfall for parts of southern California and southwest Arizona… …Southwest storm system to strengthen over the Plains this weekend… …Wintry conditions in the Upper Midwest this morning, the into New England Friday morning …

A potent storm system off the coast of southern California will continue to impact the region through Thursday with bands of heavy rain, embedded thunderstorms, and heavy mountain snow. A Slight Risk for excessive rainfall remains in place for parts of southern California and southwest Arizona where Flash Flood Watches are in effect. Localized areas of flash flooding are possible especially within bands of heavy rain where rainfall rates could reach 1 inch per hour. Heavy snow will blanket the southern California mountains with snow likely to be measured in feet in the higher elevations. Lower elevation rain and mountain snow will continue in these areas through late Thursday but drier conditions will return by Friday morning.

An upper level trough responsible for the Desert Southwest storm system on Thursday will track east through the Southwest U.S. and northern Mexico Friday and into Friday night where it will generate scattered showers and mountain snow.

Heavy snow in the southern Rockies is expected with localized amounts over a foot expected.

By Saturday morning, a new low pressure system will intensify in the Central Plains with periods of snow developing on its northern and western flanks. Snow will fall heavily at times on Saturday from the central Rockies and High Plains to the Dakotas. These regions will also deal with gusty winds that will cause drifting snow and poor visibilities. In the storm’s warm sector, showers and thunderstorms will push across the southern Plains on Saturday.

A disturbance tracking through the Upper Midwest is producing wintry precipitation and fog across the region this morning. Patchy areas of freezing fog are also possible in parts of Minnesota and Wisconsin. Drier conditions will arrive this evening as high pressure builds in from the west. Meanwhile as the storm heads northeast, its associated warm front will track through New England Friday morning leading to showers and patchy areas of freezing rain. Ice accumulations will be light but could produce slick spots for the Friday morning commute. 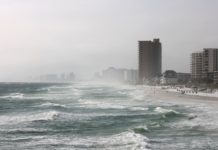