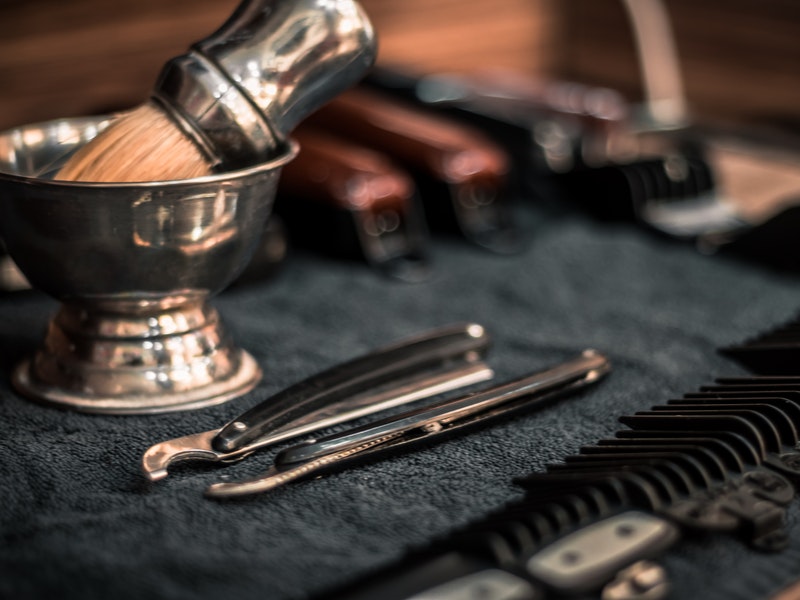 George Burns once said, “Too bad that all the people who know how to run the country are busy driving taxicabs and cutting hair.” Barbershops are not in the news much these days, however, an old-fashioned barbershop in a small town could accurately be described as “Ground Zero” for experiencing and understanding the lives of average American citizens.  The shop I am describing has been in existence for 45 years and little about its interior or exterior has changed.  Indeed, one might feel as if one has stepped into a museum.  There has never been a telephone or TV here, however, there is a quaint old drink machine, ancient refrigerator, abandoned church pew and a dusty, unused pinball machine, all occupying their respective spaces atop a worn-out linoleum floor with a 1970s pattern.  Though time seems to have come to a standstill here, the four walls have witnessed just about everything except the birth of a baby, though it would not surprise me if eventually this did happen.

The sole proprietor is my father, Lester Brent, Jr., who has been barbering since 1959.  His father was also a barber and invited his son to join him in his shop after his High School graduation in 1954, however, the younger Brent declined, preferring to join the Air Force.  Upon returning home after service to his country, he entered barber school in Richmond, returned home to join his father and has not looked back.

Lester is now approaching 84, but to someone who doesn’t know him (and there are few in this area who do NOT know him), one might guess he was around 70.  He is slight of stature, fit and trim and, until the last year or two, rode his bicycle to work every day.  He expertly cuts children’s hair, the elderly and any age or hair type in between.  Many customers are multi-generational clients, with fathers documenting their own sons’ first haircut in his timeworn chair.

In addition to a cut and a shave, one can purchase tickets to an upcoming Fireman’s Carnival or pay one’s American Legion dues, as well as peruse some literature left behind by a political candidate.  Before the current Covid-19 crisis, there often would be up to seven or eight men seated in the old mismatched chairs, animatedly discussing the events of the day.  Occasionally, a sleeping dog (or even a cat) may lie at an old-timer’s feet.

Over the years, if a local customer was short on cash, he could pay for his haircut with a bushel of corn or perhaps a dozen Chesapeake Bay hard crabs.  To those who are native to the area, this would be a perfectly acceptable form of payment for services rendered.  When my sister entered the prestigious College of William and Mary in 1979, her economics professor declared to the class that “the bartering system is dead in America.”  My sister swiftly raised her hand and contradicted him, reporting that her Dad accepted goods for services rendered quite frequently.

There has also been a significant share of drama in his shop over the decades, one notably being the time he noticed that one of his waiting customers had a peculiar look about him and seemed confused, prompting Lester to ask him if he was feeling all right.  The elderly gentlemen responded, no, he was not at all feeling well.  My quick-thinking father had another customer summon an ambulance to take this man to the nearby hospital, where it was determined that he was in the beginning stages of a stroke.  For years afterward, the old gentleman credited my Dad for saving his life.

On another occasion, the outcome wasn’t as good, unfortunately.  He told us of an elderly customer in his chair who was normally talkative, but suddenly ceased to speak.  When Lester bent down to listen to the garbled sounds he was making, he said his customer was “sliding out of the chair and down to the floor like an eel.”  Once again, the ambulance was called, but this time, to no avail.  When the crew of the Rescue Squad could not revive him, understandably, his clientele one by one exited the shop, all except for one.  While respectfully waiting for the deceased to be removed, my Dad turned to the sole remaining customer and asked if he would like to proceed with a haircut.  The gentleman replied, “I’m OK with it if you are.”  My father, who generally remains very calm and steady in the face of a catastrophe, said, “All right, come on over and we’ll get to it.”  Life goes on.

The strangest incident took place in the early 1980s when my Mother took a phone call from a man who identified himself as a Secret Service agent.  She immediately thought it was a prank and chided the mysterious caller.  When the agent somberly told her, “I assure you, Ma’am, that this is NOT a joke but official government business and I need to meet with your husband, the barber, as soon as possible,” she knew that something had gone terribly awry in his shop but was puzzled as to what exactly could have happened to cause the Secret Service to track down their (unlisted) number.  When the agent met with my Dad, he explained that there had been a report that a “threat on the life of the President of the United States” had been made in his barbershop, my father patiently explained to the Special Agent that there were apparently some jokesters present recently who had egged on someone complaining about the President and, regrettably, must have given the Agency a false lead.  When the agent asked if he considered this man a credible threat to our President, my Dad responded, “No, I don’t believe he even drives an automobile, nor has he ever left the county.”

The pandemic has curtailed the way Lester does business.  When the Governor of Virginia ordered all salons and barbershops closed, he was idle for five weeks and, according to my Mother, it was not a welcome change for him.  The word “retirement” is not in his vocabulary.  He ran out of grass to cut and sticks to pick up in the yard in about a week or two, then became extremely restless, as he has worked six days a week for about eight to ten hours a day for the last 61 years, a schedule that would stagger someone half his age.  Even on Sundays, his sole day off, after church, he would routinely travel to shut-ins or the local nursing home to cut hair.  At the request of many of his long-time customers, he would even give departed male family members their final haircut before the lid on the coffin was closed at the funeral home.

There is also a yellowed cardboard poster taped to the big mirror behind Lester’s chair that highlights the seasons of a fast-pitch softball team he played for long ago, “The Legendary Texacos”, active from 1957 until 1972.  While he won’t brag about the team’s impressive record and his contributions thereto, occasionally, a customer will bring up something about “a game you boys were supposed to have lost, but y’all handed a big upset to ‘The King and his Court.’”  My father will self-consciously nod, and a faint smile will creep across his face, no doubt as he relives the Glory Days of the tight-knit team.

When he finally does stop cutting hair and administering shaves, I wonder what will become of his shop and, more importantly, his customers.  No doubt, they will fan out to nearby salons, but the loss of this hub of activity in the community will be felt, I suspect, long after my Dad has hung up his clippers for the last time.