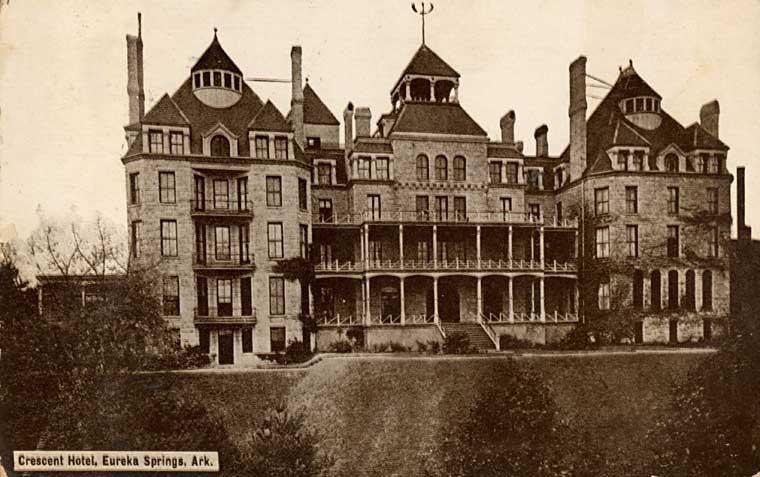 “America’s Most Haunted Hotel”, the 1886 Crescent Hotel & Spa, is a spa and resort located in the Ozarks of Arkansas.

The Crescent Hotel was built in 1886 as a resort for the rich and famous, but quickly became unmanageable and fell into disrepair. In 1908, it was reopened as the Crescent College and Conservatory for Young Women. This institution closed down in 1924, and then opened again in 1930 as a junior college. After the college closed in 1934, the Crescent was leased as a summer hotel.

In 1937, it got a new owner, Norman G. Baker, who turned the place into a hospital and health resort. Baker, a millionaire inventor and radio personality, styled himself as a doctor, despite having had no medical training. He claimed to have discovered a number of “cures” for various ailments, including cancer, and launched frequent attacks on organized medicine, which he accused of being corrupt and profit-driven.

Having been run out of Iowa for practicing medicine without a license, Baker moved his cancer patients to Arkansas and advertised his new health resort at the Crescent. His “cure” consisted primarily of drinking the area’s natural spring water. In 1940, federal charges were filed against Baker for mail fraud and he spent four years in prison. The Crescent Hotel was left ownerless until 1946. On March 15, 1967, the hotel was nearly burned to the ground

In 1997, Marty and Elise Roenigk purchased the Crescent Hotel for $1.3 million. They oversaw a six-year restoration and renovation of the hotel rooms

A recent archaeological find while building an underground parking lot has given even more insight into the hotel that was once a Cancer Curing Hospital. The following is a note from Bill Ott , the Director of Communications for The 1886 Crescent:

EUREKA SPRINGS, AR) — The 1886 Crescent Hotel, well known today as being a mountaintop spa resort in the Arkansas Ozarks, was once used as a cancer curing hospital which was under the control of the hospital’s owner, charlatan Norman Baker from Muscatine, Iowa.  Baker operated his Eureka Springs’ facility from 1937 until December 1940.

Many of his “medical methods” were revealed in his brochure which was mailed out to thousands across the country boasting his miraculous cure.  Copies of that mailer are now in the hotel archives.  However, other, more hard artifacts left behind are in the part of the hotel’s basement called “the morgue” where patrons can see Baker’s autopsy table and the walk-in cooler where he kept body parts and cadavers.

Legend says that when new hotel owners, several owners removed from Baker’s days, purchased the hotel in the 1960s, numerous bottles of medical specimens and “cures” were found in the morgue area.  Supposedly, the ‘60s owners, “got rid of” all of those bottles, etc. that Baker left behind upon his arrest in December 1939.  No one ever quite knew as to where exactly those bottles had been “dumped.”

Flash ahead to February 5, 2019, when the hotel’s on-site landscape artist, Susan Benson, was instructed to expand a lower parking area near the northeast corner of the hotel’s 15 acres.  It was on that Tuesday morning at about 11:30 when a discovery was made.  There, uncovered by the first scrape of the backhoe, were, what looked like, medical style bottles. Benson immediately reached out to hotel’s manager of ghost tours, Keith Scales, that these bottles had been found.  Scales compared those few bottles so excavated with those displayed in a Baker promotional poster and they matched up perfectly.

Realizing this could be an important find, Benson and Scales contacted the hotel general manager, Jack Moyer.  Moyer went to the site to investigate and agreed that these bottles could represent a very important find for the hotel and the history of its time as a cancer hospital.  The site was secured and the University of Arkansas at Fayetteville’s Archaeological Survey Team was called. 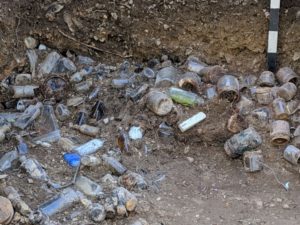 These archaeologists suggested a list of critical steps of protocol before they could become involved in an archaeological dig.  Those steps included calling local police who in turn were asked to inform the state crime lab and then contacting a HAZMAT team to come and investigate in order to give the “all clear,” allowing the safe extraction and handling of those historic medical bottles.

Over the next few days, the site was swarming with officials doing their investigation.  Upon artifact authenticity and safety confirmed, the Arkansas Archaeological Survey Team (AAST) was so informed of those clearances and an initial visit to the site was made.  A plan for a formal archaeological dig was then formulated and AAST arrived on the hotel property on April 9, 2019, to begin their investigation, extraction and examination of items so buried.

Moyer stated, “This story is fresh and ever evolving.  As more is discovered, more will be revealed.  We will keep the press and our interested patrons informed as to future elements and dynamics of this memorable discovery.”