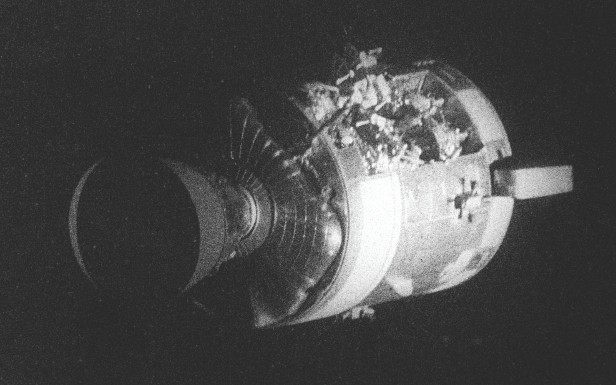 The following true short is from Southern Author Gilbert “Bud” Schill. Bud’s “Thank You For Saving My Mother’s Life” , is a 2019 Best of Yall.com Award winner.

Many Americans remember the phrase “Houston, we have a problem,” from the 1995 movie “Apollo 13,” starring Tom Hanks, Kevin Bacon and Gary Sinise, and directed by Ron Howard.  I remember the actual words, “Houston, we’ve had a problem,” when they were spoken, in real time, on April 13, 1970, during the seventh manned mission in the Apollo space program and the third intended to land on the Moon.  Unfortunately, the craft never landed on the Moon. For a time, it was “lost” on the other side of the Moon, and no one knew if it would ever return.

At the time, Tom Hanks was 13 years old and Ron Howard was 16.  I was 23 and a second-year law student at the University of Virginia, located in one of America’s great towns, Charlottesville, home of Thomas Jefferson’s beloved Monticello and James Monroe’s Ash Lawn.

As the craft was approaching the Moon on the evening of April 15, I was approaching the home of one of my professors, who had invited me, as his teaching assistant, to join some students and other guests for dinner to discuss future career opportunities.  One of those guests was T. Munford Boyd, a law professor at UVA since 1946, who, at the age of 70, was retiring from the faculty.

Known as “Munny,” Professor Boyd was a legend.  A consummate southern gentleman with an endearing drawl, he had been blinded at the age of three by scarlet fever.  He had a steel trap mind, an extraordinary memory and a terrific sense of humor. From the look on his face, you could tell when he was about to entertain those around him with a story.  It is said that after he wrote the Virginia Motor Vehicle Code, someone noticed a typo, and he responded, “What do you expect from a blind man?”

Despite the horrible accident that had taken the lives of astronauts Gus Grissom, Ed White and Roger Chaffee on January 27, 1967, many Americans were becoming comfortable with space travel and settling into the assumption that all manned flights would go fine.  The Apollo 11 and 12 missions had proceeded without a hitch, so it seemed Apollo 13 would surely be another success.

It was, but for all the wrong reasons.  Launched on April 11, 1970 from the Kennedy Space Center, Apollo 13’s voyage seemed normal until an oxygen tank exploded, crippling the service module and creating multiple dangers, including asphyxiation from carbon dioxide.  The mission was aborted before the craft reached the Moon, but it was uncertain whether the crew would be able to survive a Moon orbit or return to Earth. By April 15 (the day of the dinner party), things looked very bad. We were all worried sick about our astronauts, Jim Lovell, Jack Swigert and Fred Haise.  They were heroes to us.

Throughout the evening, our host had one of the televisions on so we could follow the news, which worsened by the minute.  We tried to talk about our future careers, but we were very distracted. Direct contact with the disabled ship was suspended.  NASA decided the astronauts should orbit the Moon once and use centrifugal force to help propel the vehicle back to Earth. As the orbit began, no one knew if we would ever hear from the crew again.  Our group found it difficult to talk, as we glanced back and forth at the TV screen. It was hard to think about anything else. The newsroom gave us continued grim news. No one was saying a word.

Standing in the middle of the dining room, and with a drink in his hand and a twinkle in his eye, he held forth:  “Let me tell y’all a story about when I was in my first year here at the Law School, back in 1921.” We wondered why he would interrupt such a tense moment with a story from half a century earlier.  It soon became evident he was trying to break the tension. Everyone paid attention. Of course, I can’t remember his exact words, but the story went something like this:

“You see, two of my classmates and I had decided to head down to Lynchburg to visit some young ladies at Sweetbriar College.  This we did, and until the end, the trip was a huge success. We linked up with three lookers and took them out to a local watering hole.  All six of us got totally wasted. After dropping the girls back at their dorm, we commenced our late night return trip to Charlottesville.  For reasons that are difficult to explain, but I guess because they thought I was less drunk than they were, my buddies insisted I drive. So I did, even though I hadn’t actually seen a car since I was three.

“As you know, Route 29 up from Lynchburg is tough to drive at night.  In fact, it can be a tough drive during the day. Two lanes, numerous curves, no shoulder.

“I’m driving.  One of my mates is in the front seat, one in the back.  Neither can focus too well on the road, which still put them only slightly ahead of me.  ‘A little to the right.’ ‘A little to the left.’ ‘A little more left.’ ‘Watch out for that deer!’  And so forth. I wasn’t sure we’d make it.

“Other than via their encouragement and griping, I couldn’t tell how well or how poorly I was performing.  Apparently, I was doing a lot of swerving. Not surprisingly, we were eventually pulled over by a constable.  I couldn’t, of course, see him coming, nor could I see the light flashing, but since my ears still worked, I heard the siren.  Somehow, I brought the car to a halt without plowing into anyone’s mailbox.

“The police officer leaned into the window, cognizant of the smell of alcohol, and said, ‘License and registration please.’  My inebriated friend in the front seat opened the glove compartment and fished for the registration, thrusting it into my hand.  I aimed it toward the window. ‘In case you forgot, I also asked for your license, young man.’ ‘Oh right. Driver’s license?’ ‘Look, smart alec, hand me your driver’s license right now!’  ‘I don’t have one.’  ‘You mean you can’t find it?’  ‘No.’ ‘Then where is it?’ ‘I don’t have one.’  ‘Why not?’ ‘Because I’m blind.’ The three of us spent the night in jail.”

As Munny finished his story, Apollo 13 came around the other side of the Moon, and radio contact re-commenced.  Still laughing at Munny’s story, we were all very relieved.

Of course, the return trip to Earth of the Apollo 13 crew, using the lunar module as a lifeboat and jury-rigging several devices, was among the most dangerous and heroic accomplishments in the history of manned flight.  More dangerous, even, and certainly more heroic, than Munny Boyd’s trip up Route 29. But when I think of one, I always think of the other.