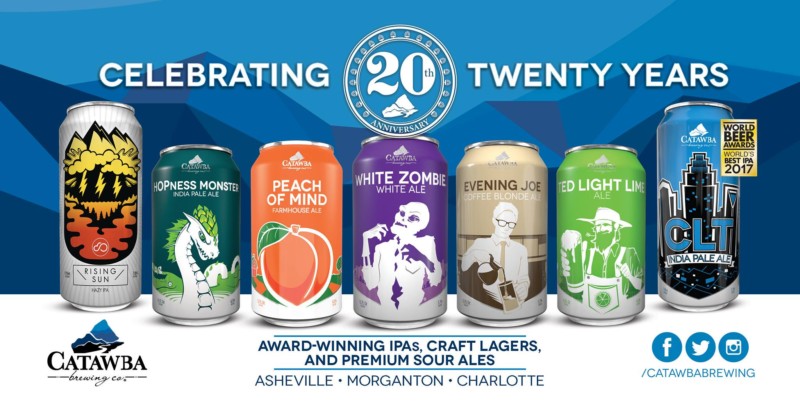 ASHEVILLE, N.C., (July 1, 2019) – To mark its 20th anniversary, family-owned Catawba Brewing Co. will celebrate with Asheville for an entire week. The emerald-anniversary excitement will kick off on July 15 with a “Find Green, Get Green” gift card promotion where patrons will have the chance to win a $20 gift card during the week, or a $200 gift card on Saturday at the South Slope tasting room. Catawba will cap off the week on July 20 with an all-day party at its South Slope location, replete with four anniversary beer releases; onsite T-shirt printing; multiple bands; Blind Pig bites; Three Eggs Cakery of Asheville sweet treats, plus a celebration at the Biltmore Village tasting room.

“I still vividly remember our humble beginnings as homebrewers in a kitchen and have to pinch myself when I think of how far we’ve come in 20 years – to now be the fifth largest craft brewery headquartered in the Southeast! We are so grateful for our Catawba family on staff and our Catawba family of loyal customers and partners – we wouldn’t be celebrating this milestone without their years of support.”

On each day (July 15-19) leading up to the anniversary bash, both Asheville tasting rooms (Biltmore Village and South Slope) will have one pint glass with a band around it, an emerald green color in honor of the 20th anniversary. The glass will be randomly hidden in the day’s serving glassware; the lucky person to be served the emerald glass “gets green”—a special emerald-colored $20 gift card valid for anything at the Catawba tasting room. The guest who is served the emerald glass during the July 20 anniversary party at the South Slope location will receive a $200 gift card.

Beer Releases: A Nod to the Past, Present & Future

Catawba will be releasing four anniversary beers on July 20. Each release is representative of Catawba’s past, present, or future. Details are under wraps until the week of July 15 when particulars will be unveiled on Catawba’s social media channels.

Catawba will simultaneously be hosting the Find Green, Get Green promotion and anniversary bashes at its Charlotte and Morganton tasting rooms as well.

Catawba Brewing Co. has been an industry leader in Western North Carolina’s craft beer scene for two decades. The company was founded in 1999 by WNC natives, the Pyatt family, who were inspired by their weekend homebrew hobby. From humble beginnings, the business has grown exponentially to become a major craft beer supplier across five states. Catawba now operates breweries and tasting rooms in three NC cities – Morganton, Asheville, and Charlotte – embracing a hybrid wholesale/retail strategy. With the 2018 acquisition of Palmetto Brewing Co. in Charleston, SC, the Pyatt family hobby has spawned one of the Southeast’s largest and most diverse craft brewing entities. Learn more at www.catawbabrewing.com