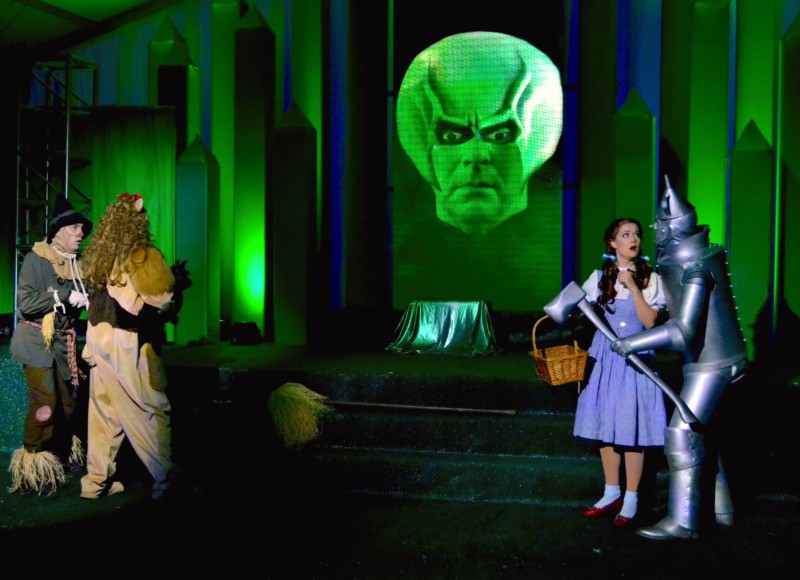 If you’ve ever gone searching for your heart’s desire, look no further. You will experience the magic of Oz during this two-week event where the Scarecrow, TinMan, and Lion are ready to greet you on your travels, along with all of your other favorite characters from the classic story! This is the only event of its kind where you are immersed into the actual Land of Oz and may run into a Munchkin, Flying Monkey, or Toto, too!

I don’t think we are in Kansas anymore. In fact if you visit the Land of Oz Theme Park, you really aren’t. You are in a ski resort in the Blue Ridge Mountains called Beech Mountain, NC.

In a world gone mad, in a good way, someone has made us Wizard of Oz fans giddy with excitement over the chance to skip down the Yellow Brick Road with Dorothy in a completely character submersive experience.

It’s the history of this theme park, that has as many twists and turns as the Yellow Brick Road itself. According to Sean Barrett , who handles PR for Land of Oz Theme Park, the story goes like this:

Land of Oz was in operation from 1970-1980, and was the brain child of Charlotte, NC-based designer, Jack Pentes. Developers Grover and Harry Robbins, who previously built Tweetsie Railroad in Blowing Rock, had leased the top of Beech Mountain with Carolina Caribbean Corporation, and wanted to develop an attraction during the summer months. Jack knew it was to be Oz when he saw the twisted beech trees that reminded him of the trees in the Judy Garland film. He then walked a dirt path on his knees to design the entire layout from a child’s perspective while keeping the mountain’s natural landscapes in tact. Construction began in 1968,and was to be completed in 1969. However, the remote location and unpredictable weather pushed opening to 1970. Grover Robbins passed away in March of 1970, just a few months shy of the June opening.
Debbie Reynolds and daughter Carrie Fisher would be at the grand opening on June 15th. Reynolds developed a relationship with the Robbins family and Carolina Caribbean when both parties were at the 1970 MGM Liquidation auction, where the entire MGM studio and its contents were being sold off. The big ticket item in the auction was Judy Garland’s ruby slippers, which is the pair currently in the Smithsonian.
While Oz did not place the winning bid, they would go on to purchase and co-own dozens of the film’s original costumes with Debbie Reynolds including Dorothy’s dress, Munchkin and Emerald City Costumes, and all of Frank Morgan’s wardrobe. A few pieces were selected to be on display in the park’s small museum.
The park’s score featured music and lyrics by Loonis McGlohon and Alec Wilder with the show’s choreography by Alice Leggett Lamar. The opening season would see over 400,000 people and would be featured on the covers of Southern Living and Holiday Inn magazines, while being named the Number One Tourist Attraction by the Washington Post.

By late 1975, Carolina Caribbean would go bankrupt due to one of their failed investments in St. Croix.
December 28th, 1975 – a fire is set to Emerald City destroying the amphitheater stage that housed Oz’s wardrobe and offices as well as a nearby gift shop. Oz was to be shut down, but Tri South of Atlanta took over management and rebuilt Emerald City in just under four months to re-open Oz again in late June 1976.
By this time, attendance dropped to 60,000.
Oz would struggle over the next few years and close its doors in October of 1980. After Jack Pentes did an on-site review, he estimated it would cost an upwards of $3 million to bring the park up to speed. There were talks of re-opening through 1983, but by 1985 it was decided the property would be developed into a gated community. In May of 1986, the Emerald City would be bulldozed and the balloon ride would be dismantled and rebuilt as a ski lift.
Houses were built surrounding the property keeping Kansas and the yellow brick road relatively left to their own devices. The owners of the land began an employee reunion during Lees McGrae’s homecoming, and would scatter small one-day openings throughout the early 1990s.
By 1993, property manager Cindy Keller would turn this into the annual Journey with Dorothy festival. This has now grown into a two-weekend event along with Journey with Dorothy tours in June. Currently, the new management team is working hard to revamp Oz’s events as well as expanding them while continuing to use the funds from these events to restore the property.

With Dorothy as your guide, you will find yourself skipping down the yellow brick road through the Land of Oz to help in her search for the wonderful Wizard during this one-of-a-kind interactive experience.

You may be randomly selected to play one of your favorite characters as you are led through the original Land of Oz Park. On this adventure, you may see Dad “Putting ‘Em Up” as the Cowardly Lion or Grandma cackling like the Wicked Witch of the West!

For the first time ever – Extended Dates for 2019! Get more chances to visit Oz over two weekends this September! Celebrate the 80th Anniversary of this classic MGM film at the 26th Annual Autumn at Oz Festival – one of the world’s largest Wizard of Oz events! Skip down the Yellow Brick Road atop Beech Mountain – one mile high in the sky – where you will literally be over the rainbow.  Sept. 6-8 and Sept. 13-15.

This year for the 80th Anniversary of The Wizard of Oz their Museum will feature actual Costumes & Memorabilia from the 1939 MGM Film & More!