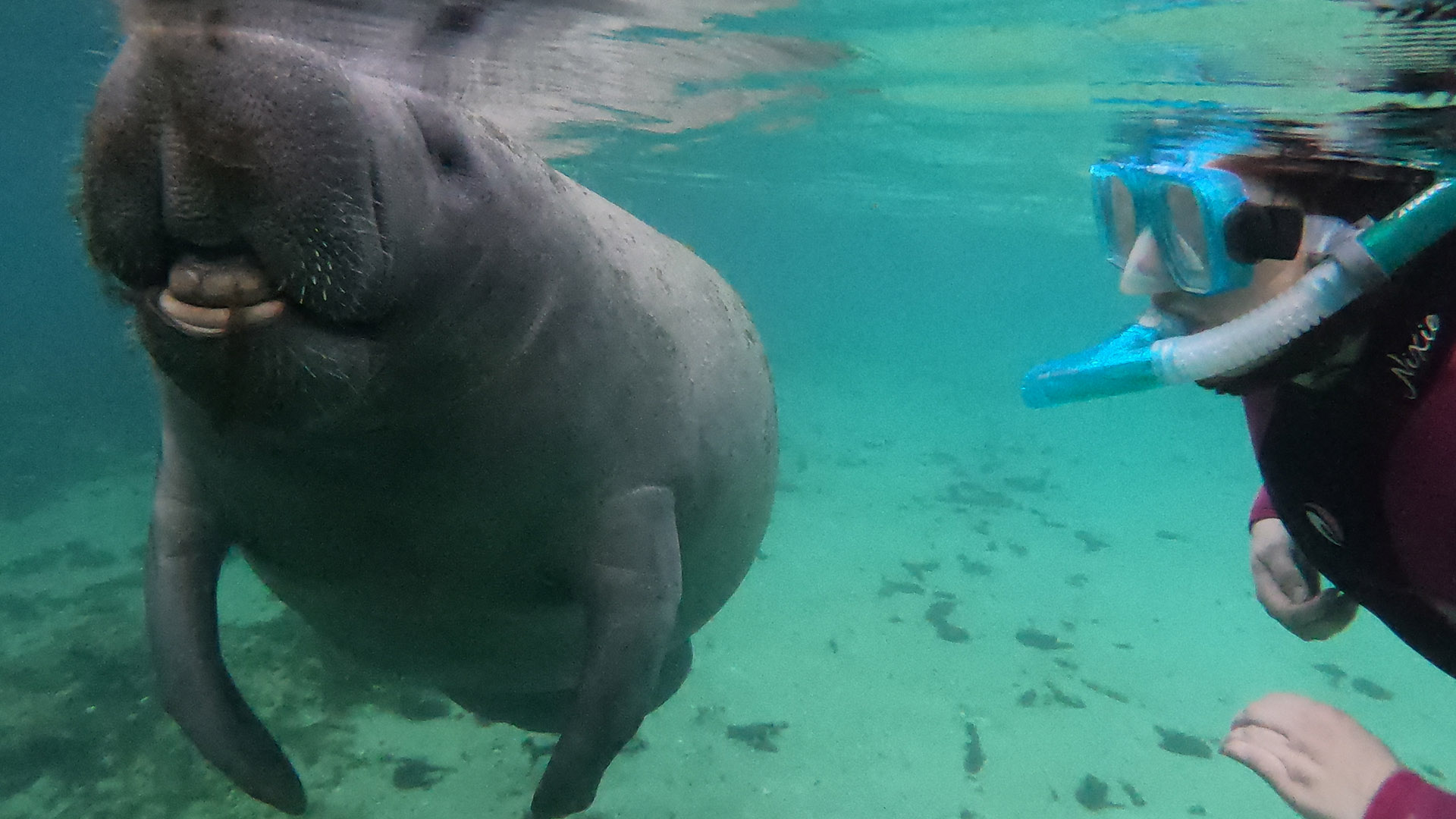 CRYSTAL RIVER, Fla. – I was berating myself as I struggled to get my wetsuit on. Did I really have to have that last bite of she-crab soup with all that heavy cream last night? I was told it was one of the signature dishes at West 82 Bar & Grill, the restaurant at The Plantation on Crystal River. So, yes, of course I had to give it a try.

“Have you ever put on a pair of stockings?,” asked Mark Spann at Plantation Adventure Center, an arm of The Plantation on Crystal River, a grand old Florida resort now in its 63rd year. Spann would be the one guiding our boat down the Crystal River, looking for the best place to drop anchor and snorkel around in search of manatees.

“Many a time,” I replied in answer to his question, pulling that last bit of thick, rubbery fabric up and over my shoulders. Once done, I and five others were ready to embark on what many consider an item on their bucket list: swimming with the manatees.

Manatees get going early in the day, and so must you for the best chance to see them. There are quite a few tour guides offering the manatee experience, but none as convenient as the Adventure Center, just a stone’s throw from the resort’s front desk.

There are a couple of other reasons to use this outfitter. Coffee and hot chocolate are offered onboard to ward off a cool Florida morning, particularly after a couple of hours in the water. And while most other places offer suits that are three millimeters thick, the wet suits at Plantation are five millimeters thick, allowing for more warmth in the water – and you’ll also float like a cork. No need for pool noodles that become quite cumbersome.

This is a popular excursion when visiting the town of Crystal River, so there may be a few boatloads of people occupying the same stretch of water, but the river is wide and there’s room for all. However, Spann said there’s no guarantee that the manatees will be there when you are. The day before our trip none were seen. Twenty-four hours later, there were numerous manatees resting in the warm waters of the springs that bubble up from deep down in the Earth, providing manatees with the warmth they need.

As we snorkeled through the clear waters of Crystal River using our arms, not feet, so as not to disturb the resting manatees – males, females and their calves – we could see snook and cormorants, as well as other diving birds beneath the water. There’s more to this tour than manatees. But that’s what we were there for, and Mother Nature delivered.

After seeing the manatees underwater, there are several places you can visit in the Crystal River area that offer viewing experiences above water.

Three Sisters Springs, a unit of the Crystal River National Wildlife Refuge, is one of the areas that we snorkeled, and it provides a safe, roped-off haven for the manatees. Snorkelers cannot go past the line, but a boardwalk around the springs allows walkers to view into the crystal-clear water from above and see the mammals from a different perspective.

Tickets to the springs may be purchased at the Three Sisters Springs Center (123 Northwest Highway 19, Crystal River). A trolley that runs every 20 minutes or so will take you to the spring and bring you back. The boardwalk around the springs is well-staffed with volunteers to answer any questions.

For an all-encompassing afternoon to see more wildlife native to Florida’s waters and woodlands, take the 10-minute drive to Homosassa, Fla., and the Ellie Schiller Homosassa Springs Wildlife State Park, the second-most visited state park in the state. The park, once a tourist attraction with exotic animals, is now part of the Florida State Park system. The only animal that remains from its days as an exotic animal park is “Lu” the hippo, now 60-years-old and said to be the oldest hippo in the Americas and most assuredly not native to Florida. All of the other animals are native and are ones that have been injured or otherwise unable to be returned to their native habitats.

Just as the water in Crystal River is clear, so is the water at Homosassa Springs. The water is warmed by the springs, and manatees love it. Expect to see many from your perch in the viewing platform above the Homosassa River. Make a day of it. Bring a picnic or purchase food from a small café in the visitor’s center.

Floridians love their manatees. You’ll find their roly-poly bodies emblazoned on ball caps, face masks, T-shirts, beach bags and koozies. But in the 1960s, there were only about 500 manatees left in the wild due to human encroachment along Florida waterways, water pollution and collisions with boats and ships.

Manatees were classified as endangered species in the late 1960s by the U.S. Fish and Wildlife Service. In coordination with Florida Fish and Wildlife, their numbers have multiplied significantly. As of 2019, there were an estimated 13,000 manatees worldwide, with about half of them taking up residence in Florida waters.

While most of the manatees disappear from Crystal River come April, Spann said there are a number of permanent residents, so the manatee tours happen year round, However, chances of an encounter diminish in the spring and summer until they return in the fall.

And when you do see them, leave them be. Touching them is a big no-no while snorkeling, kayaking, swimming or whatever water sport you in which you may be engaged. Manatees are a protected species.

There are a number of mom-and-pop motels and motor courts in Citrus County, as well as several chain hotels. The Plantation on Crystal River is one of them and is part of the Choice Hotels Ascend Collection. In addition to the Adventure Center, the hotel offers a heated pool; the West 82 Bar & Grill – the she-crab soup is a must; two bars – one poolside; shuffleboard; volleyball; biking; paddling and other activities that celebrate the outdoors. Rooms in the historic, plantation-style hotel have been updated, and the fitness center is well-stocked with treadmills, weights and other equipment to keep you in shape if snorkeling and paddling the Crystal River don’t do it for you.

Walking along the King’s Bay Riverwalk – a path that’s a work in progress — takes you along the waterfront and into the the downtown area with its restaurants and shops. As I walked along, I passed King’s Bay Lodge, a motor court straight out of the 1950s.  Retreat at Crystal Manatee is another family-owned hotel in the heart of downtown Crystal River. Then there’s Hampton Inn, Comfort Suites and a host of others where you can lay your head after a day of adventure.

Crystal River has been rediscovered by chefs whose creative endeavors bring new dimensions in dining to the area.

From the outside, Vintage on 5th looks like a charming little cottage-style eatery. Chef Aaron Davidson does magic with seafood, steaks, rack of lamb and the other cuts of meat. I’d checked out the menu beforehand, and when I saw “fresh seafood market selection depends on what is fresh, interesting and available” I knew in advance that would be my dinner – whatever it was. In this case, Chilean sea bass with sweet pepper hollandaise over creamy sundried tomato-caper risotto. If you’ve ever had a bite of something and had to pause while you silently praised the chef, you know of which I speak. The Chilean sea bass brought me to my knees.

Something new and delicious is happening in Homosassa thanks to Chef Wallace Phaire at Wallace’s at the Greenhouse. The restaurant is a small green house along a very busy four-lane highway, across the street from a large car dealership; and since the road was under construction, it wasn’t easy getting into the parking lot, but worth the little bit of trouble I had finding the entrance. The restaurant is, surprisingly, a peaceful haven with a lake out back and a remarkable wine program, along with a fresh menu of steaks, pasta, seafood, barbecue ribs, sandwiches, salads, burgers – the usual stuff, but all prepared in interesting fashion. The shrimp and grits, for example, is not your usual mound of grits with shrimp on top. Here, you’ll find it topping a cake of cheddar grit with charred corn, tomatoes and andouille sausage all drizzled with a dreamy Cajun cream sauce. Even the grilled cheese sandwiches are something different. Case in point: the JPD Grilled Cheese with jerk braised pork, caramelized bacon onion jam and smoked gouda.

Crump’s Landing is a touristy place, the kind of place I usually avoid. It’s crowded at lunchtime and a popular evening destination for the Homosassa bar crowd. But Crump’s place on the water with its beautiful views – along with manatees that may swim over – make this a wonderful place for a meal on the water. Try the fish tacos or a burger with a cold beer.

For a complete rundown of what to do, see, taste and experience in Crystal River, as well as more information about the enchantment of the manatees, visit discovercrystalriverfl.com. 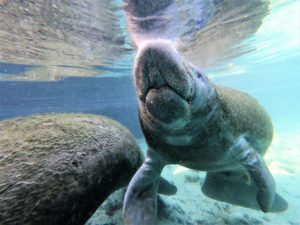