We went crazy (pun intended) as we started to research the Most Haunted Places in the Bluegrass State. 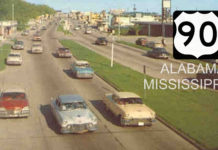