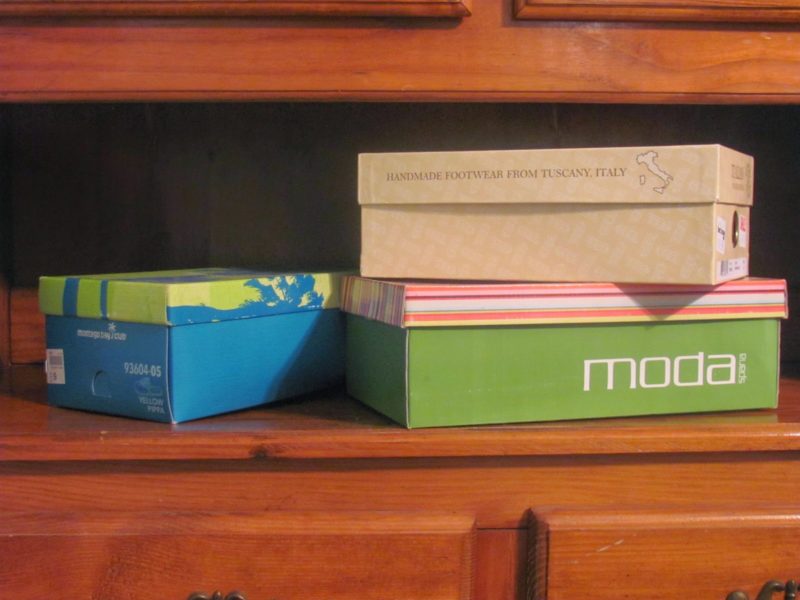 He saw the old Florsheim shoebox in the back of the attic, resting beneath the lamp with the male cardinal standing sentinel under the ancient incandescent bulb. He left it there. He hadn’t been looking for it.

He’d been looking for the white plastic stepstool. In the morning he’d replace the dim bulb above the master vanity on Amanda’s side. Best to use the morning energy and three eggs over medium to pursue the bulb change before watering the flowers.

At three in the morning he awoke. He’d had a dream. In the dream there were four torn scraps of paper, a word written in black cursive on each, staring at him from the coffee table he hadn’t kept after college. He didn’t know where that coffee table went in 1971. But he knew where the scraps of paper went. They’d lived with him in secret for forty-nine years, hidden in four attics across the decades of children, grandchildren, and the kind of love that doesn’t live in a shoebox.

Careful not to awaken Amanda, he lowered himself out of bed and into his waiting slippers. He padded through the open doorway and down the hall to the ceiling’s attic door that waited, like his slippers, to return him to the endless road of regret.

He grabbed the pull cord and lowered the door until he could grip both sides of the ladder, extending it noiselessly to the floor. The WD-40 had yet to fail him. He’d happily do a commercial for the WD-40 people. Such was his gratitude on many three-in-the-morning journeys to 1971 and the kind of love that does indeed live in shoeboxes.

At the top of the attic steps he rested to let his heart slow its staccato, then reached for the flashlight atop the trunk that had carried all three kids’ clothes to all three kids’ colleges.
He shuffled to the attic’s rear, careful to avoid Billy’s old Big Wheel. He lifted the cardinal lamp and set it gently on the floor to the left of the Florsheim box. As he reached for the box, the old panic set in, the panic he’d felt in 1971, in the days and weeks that stretched into months and years, the panic whispering “How are you going to live this life without her?”

He opened the box and retrieved the four scraps of yellow lined paper. Sitting cross-legged despite the pain in his hips, he spread the pieces in a row on the wood-plank floor. One at a time, he shone the light on each scrap. The first, the only one with a capital letter, said ‘Do’, the loop of the D caressing the ‘o’, carrying them both toward the second word, which featured a single letter, graceful and deserving: ‘I’. The third bore the awful verb: ‘bore’. The last revealed the end: ‘you?’

He lifted the flashlight. “Do I bore you?” he whispered.

He’d found the note under his dormitory door after attending a mixer as rush co-chairman of his fraternity. He’d shaken his head in youthful wonder. How on God’s earth could she think she bored him? She didn’t. Naturally.

Three nights later she broke up with him before dessert. Devastated, he’d pleaded and then surrendered, returning to his room in a fit of hurt, tearing the note into four small pieces.
Later, when her best friend told him about the rumor that he’d cheated on her, his righteous fury was that of a young man victimized. It wasn’t his fault that there were devious and jealous people in the world.
Now, sitting on the attic floor with a note in four pieces, he remembered that it hadn’t been his fault that she was told the lie about him. He wouldn’t have cheated on her with a gun to his head.
What was his fault was that she believed it. She was hurt. She’d asked the right question.
Do I bore you?

There were two answers: the one that puts love in a shoebox, or the one that lives in the sun and rain like forever flowers.
He closed his eyes and thanked her again—wherever she and her own forever flowers might be—for teaching him to make the question unnecessary for the love of his life, who slept alone downstairs during his annual date with the good fortune that often accompanies regret.

T.D. Johnston is an award-winning author who splits his time between Jacksonville, Florida and Beaufort, South Carolina. His 2017 short-story collection, “Friday Afternoon and Other Stories”, won the International Book Award for Best Short Fiction. His stories have appeared in numerous journals and anthologies, and his tale titled “Weeding for Eisenhower” was named a Yall.com Best of 2019 Original. His first two novels, “Reciprocity” and “The Daffodil Society”, are due out in late 2020 and 2021.