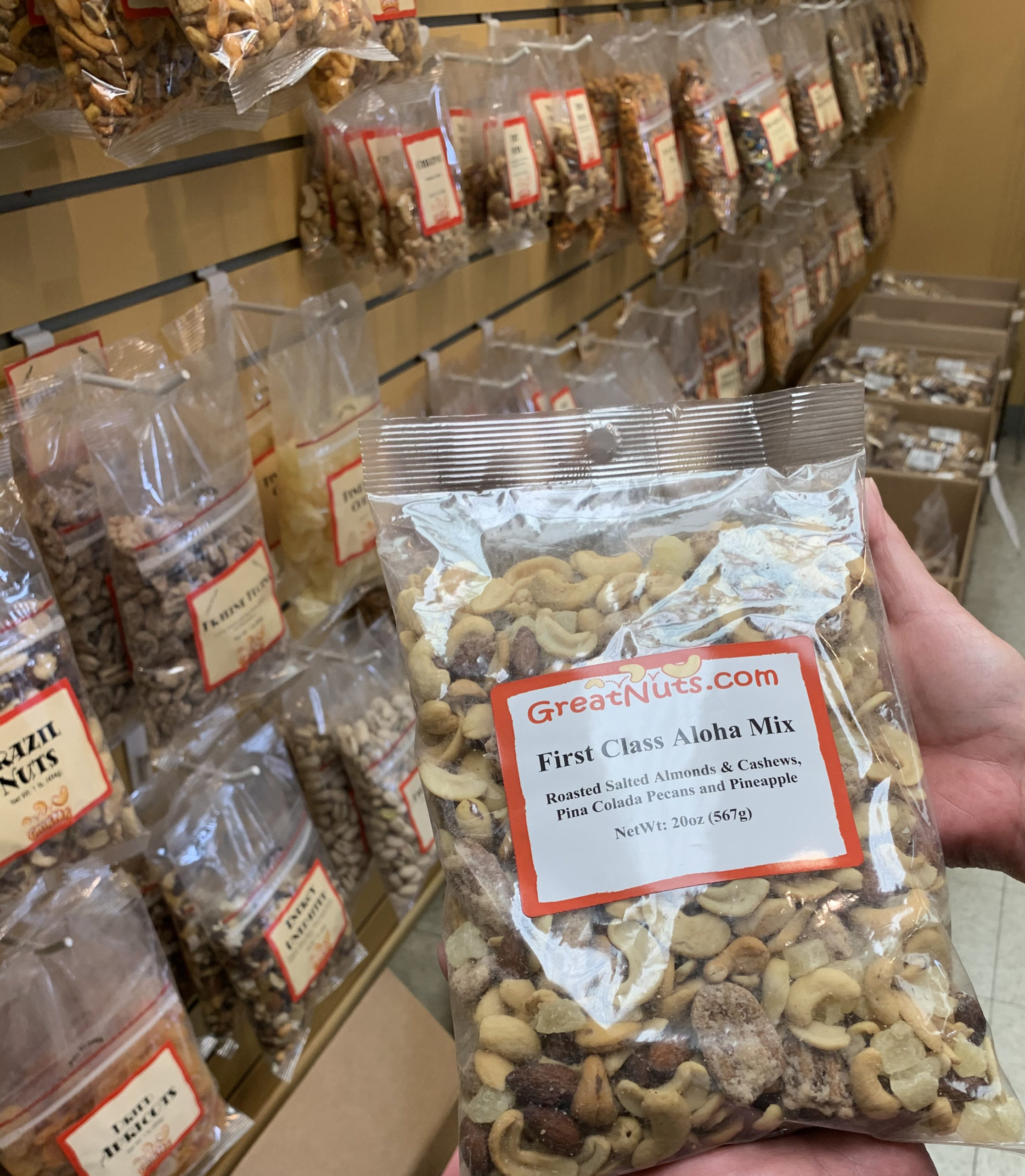 Two major airlines dropped their nuts from their first class cabins in March due to COVID-19.  The nut mixes were served in ramekins, and the airlines wanted to reduce transactions between flight crews and passengers. With nowhere to go with several hundred thousand pounds of nuts, the airline nut supplier, GreatNuts.com, began selling bags of the mixed nuts at near cost in their store, at their plant, and online at GreatNuts.com. The company sold 100,000 pounds of mixes from June to date, but is still left with more than 200,000 pounds of ingredients to make into mixes. Additionally, there are the contracts.

Kim Peacock, President and Owner, explains, “Nut markets are volatile. To guarantee a locked-in price for a year, we had to sign contracts with brokers, who in turn sign contracts with growers. We were only about three months into the new contracts when the airlines pulled the nut mixes, so we were left with nine months of contracts at huge quantities and nowhere to go with them.

“If nut prices had risen, that would have been great!  The brokers could have re-sold the contracts at a profit. But that’s not what happened. Nut prices plummeted. So, when the brokers sold the contracts, they did so at a loss. Now, they are expecting us to pay for the loss. The loss is $700,000, and we just don’t have it!  It looks like the only way out is to sell the business to pay for it.

“It would be helpful if United Airlines would pay us for the almost $100,000 for the nut mixes that have been sitting in their distributor’s warehouse since March. But though we’ve been appealing, begging and encouraging them to pay us, we’ve yet to be paid.”

“I am so grateful for the more than 19,000 orders we’ve received and the customers, who have bought from us. I answer most of their questions personally, because their emails get sent directly to me. They’re so supportive, and I get a boost out of interacting with them.”

“This situation is changing our business model, and we’re working long hours to improve our website and hone our skills building new areas of our business. I am just not sure it will be enough to overcome the huge burden of the contracts dilemma.”

GNS Foods, Inc. is the corporate name for GreatNuts.com and is a nut, snack, and candy processor. The plant and its retail store, GreatNuts.com are located at 2109 E. Division St in Arlington, Texas since 1990. GNS Foods roasts and seasons nuts, makes snack mixes, frosted nuts in nine flavors, divinity, nut logs, pralines, nut brittles and fudge. GNS Foods is a certified woman-owned and family-run business.