The intersection, which marks the transition from downtown Auburn to the university campus, is known as Toomer’s Corner. It is named after former State Senator “Shel” Toomer (a halfback on Auburn’s first football team in 1892) who founded Toomer’s Drugs in 1896. Toomer’s Drugs is a small business on the corner that has been an Auburn landmark for over 130 years.

The tradition of rolling Toomer’s Corner is said to have begun when Toomer’s Drugs had the only telegraph in the city. During away football games, when employees of the local drug store received news of a win, they would throw the ticker tape from the telegraph onto the power lines.

The beginning of the tradition of throwing toilet paper into the trees, power lines and every other stationary object on the corner is open to debate.(SOURCE) 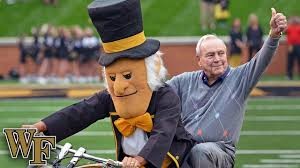 In 1923, the Wake Forest football team defeated rival Trinity (later renamed Duke University). In the following issue of the school newspaper, the editor of the paper, Mayon Parker (1924 Wake Forest graduate), first referred to the team as “Demon Deacons,” in recognition of what he called their “devilish” play and fighting spirit. Henry Belk, Wake Forest’s news director, and Garrity liked the title and used it often, so the popularity of the term grew. 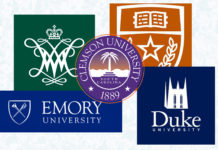 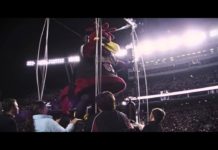