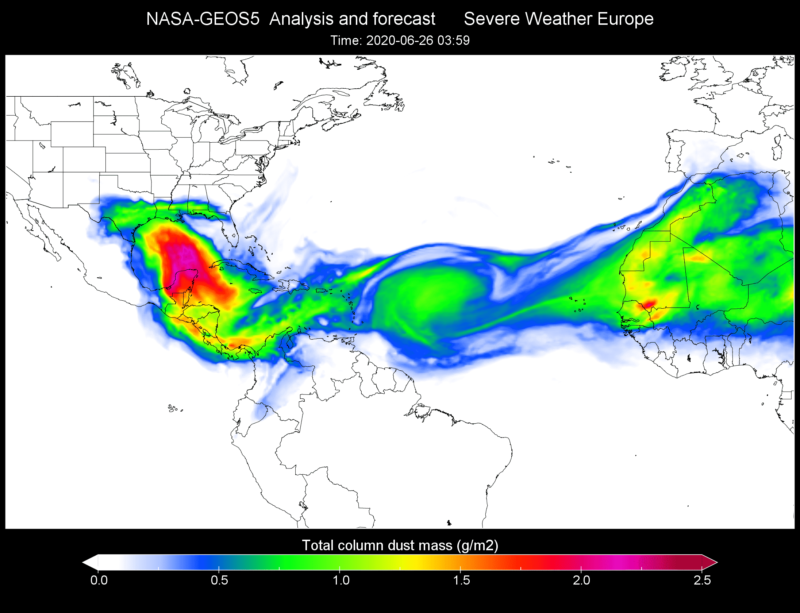 The Saharan Dust Plume…yep 2020 so far has brought us so many things: Pandemic, Murder Hornets, and now The Saharan Dust Plume. Compared to the first two, this event actually has a bright side. Let’s look at what it is and how it is going to affect weather in the South going into this weekend.

What is the Saharan Dust Plume?

The Sahara desert in Africa has dust storms this time of year. Ths dust is picked up by jet-streams and moved across the Atlantic. Usually, it’s not a big deal by the time it reaches the Gulf. But, since this year is anything but normal, neither is this dust plume.

According to NOAA’s Hurricane Research Division, every three to five days from late spring through early fall, a mass of dusty air known as the Saharan Air Layer (SAL) forms over the Sahara Desert and moves westward across the tropical North Atlantic. The SAL, which extends about 5,000 to 20,000 feet into the atmosphere, can be transported several thousand miles, reaching as far as the Caribbean, Florida, and the U.S. Gulf Coast when winds are particularly strong

The initial dust outbreak was driven by a few different smaller storm systems over central and west Africa. Several of these thunderstorms caused downdrafts and large-scale haboobs (dust storms) to develop. This led to a large amount of dust being uplifted into the atmosphere from the Sahara. Meanwhile, the African jet stream was unusually weak and all of this dust gathered off the coast of Africa. The jet stream ramped back up and …boom!!!.. you have a major Saharan Dust Plume.Or, as some members of the media are calling it “Godzilla”.

#SATELLITE SPOTLIGHT: This #SaharanAirLayer (#SAL) tracking animation shows how the plume of #dust and #sand from the #SaharaDesert has moved westward over the last 5 days. Areas of red and pink represent the dry, dusty air as seen from @NOAA‘s #GOES16 🛰️ pic.twitter.com/mh7gULXFSU

The Saharan Dust Plume (hereafter known as TSDP), hit the Caribbean and parts of the Mayan Riviera Wednesday. It is expected to arrive in parts of Texas and then move east through Arkansas, Louisiana, Tennessee, Kentucky, and Missouri this weekend Milky, hazy skies kept many inside. Those with allergy issues and breathing problems should stay indoors. Air quality will be poor.

If you are a fan of spectacular sunrises and sunsets this will be great!

TDSP is loaded with elements such as iron, calcium, phosphorous, silicon and mercury, acting as a natural fertilizer for local flora and creating chemical reactions with the properties of water, preventing large-scale natural catastrophes. Like hurricanes and tropical storms. We’re not saying no tropical storms or hurricanes, we are saying that a Cat 5 is less likely during this time.

The plumes usually dissipate by August. And this first wave is the largest recorded.

Rain and storm forecasts over the South this weekend will help relieve some of the issues.

So, in conclusion, check your air quality index this weekend if you live anywhere from Dallas, along the Gulf Coast, Alabama, Arkansas, Tennessee, Mississippi and Kentucky. If you are susceptible to allergies or breathing issues you probably want to stay inside. Just watch the sunrises and sunsets from your windows. By Tuesday, much of this first wave of TSDP should be mostly dissipated.