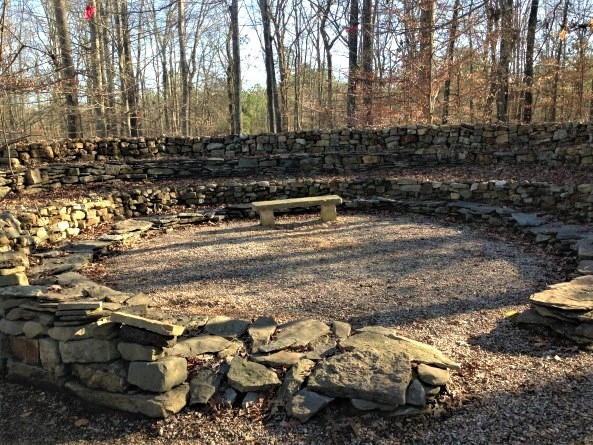 Tom Hendrix spent thirty years building a wall. His wall isn’t a barrier or a monument to himself. It is a tribute to the indomitable spirit of one Native-American ancestor and what her life’s journey teaches us all about our common humanity and the profound significance of how we order our steps in this world. That’s one wall worth building. – Shawn Pitts

The tourism professionals bill it as the largest freestanding, un-mortared stone wall in North America, or some such. That would seem to place it in a marketing subcategory of the world’s largest cheesy roadside attractions, such as the world’s largest ball of twine or clothes hamper. If you go looking for that sort of thing, you’ll be disappointed. But if you just go stand in that space, clear your mind for a moment, and breath in the rugged, sinuous beauty of the Wichahpi Wall, you will sense the resplendent spirit that inspired it. That is all Tom Hendrix ever wanted in the first place.

The Natchez Trace Parkway, a majestic ribbon of national park extending from Natchez Mississippi to Nashville, Tennessee, meanders only briefly through the northwest corner of Alabama—33 miles to be exact. Without question, the most spectacular natural feature of this short section of the Trace is the glorious blue expanse of Tennessee River near the Alabama/Tennessee state line. The river crossing rivals the swell of the Mighty Mississippi at the Trace’s southernmost point, and dwarfs the Cumberland which marks its northern terminus. Roughly 10 miles north of the river stands an improbable stone monument built by a retired auto industry worker named Tom Hendrix. It honors his great-great-grandmother, Te-lah-nay, a Native-American woman he never met. But, naturally, the story of the river and Hendrix’s indigenous ancestors are conjoined.

Te-lah-nay, a member of the small Yuchi tribe, was lumped in with a diverse group of native peoples who occupied the lower Tennessee River Valley, and marched west to Oklahoma during the Indian Removal Act of 1830. According to local lore, the Yuchi held the Tennessee to be sacred and communed with her as Nunnuhsae, “The Singing River.” A mystical, musical connection to those waters provided physical sustenance as well as spiritual guidance to the Yuchi. Out West, the rivers sang no familiar songs and offered no solace to Te-lah-nay’s  people. She knew where she belonged, and it wasn’t Oklahoma. Practically on arrival, she undertook a grueling five year journey back to Alabama where she lived out the rest of her life in Nunnuhsae’s peaceful embrace, passing the stories and songs along to those she loved.

Tom Hendrix was nurtured on these tales from an early age and always identified as the family tradition bearer. But it was a chance encounter with a Yuchi elder that set him stacking stones. “All things must pass through this world;” the shaman reportedly told him, “only the stones remain.” Shortly thereafter Hendrix began a thirty year project that would result in the Wichahpi Commemorative Stone Wall. It winds for roughly a mile through a beautiful hardwood grove at the edge of The Natchez Trace Parkway—the Trace itself, a fitting monument to Native-American passages. Each stone—an estimated 3,500 tons of them—represents a step Hendrix’s ancestor took on the road from Oklahoma back to her native Alabama. The dry-stacked limestone and sandstone edifice towers overhead in places and descends to knee-high in others. Hidden grottos and inviting stone courtyards are  found along the serpentine pathway as it weaves its way under the high canopy mirroring Te-lah-nay’s mysterious and circuitous journey home.

He called it Wichahpi, a Native American word which translates “the stars.” Wichahpi because, he said, Te-lah-nay’s monument, like the stars, belongs to all people. It is not officially recognized by the National Park Service as part of The Natchez Trace Parkway. You won’t find it listed on their website, maps or promotional materials. But that hasn’t stopped people from flocking to it. Visitors from virtually every state and numerous foreign countries have made pilgrimages to The Wichahpi Wall, to pay respect to a long-dead Yuchi woman whose story went unsung and largely unknown outside her own community in her own lifetime. When strangers started showing up with stones to commemorate their own life journeys, Hendrix encouraged it. He might sooner have blotted out the stars than deny them that simple expression of common humanity; the desire to say that everyone’s path through this life matters; to write it in stone. Those wondrously mismatched stones declare, in some mysterious way, that we walk with her in spirit; her steps are our steps. Some of the regional tourism organizations now promote Hendrix’s wall as a cultural attraction, but he was famously ambivalent about that sort of publicity. “If they are meant to be here,” he sagely observed, “they will find it.”

We found it one bright, and unseasonably warm February afternoon not long before Tom Hendrix took his own journey to join Te-lah-nay where the waters never cease to sing. We never expected to see him there, but Mr. Hendrix met us at the entrance to the monument, cheerfully welcoming us, faithfully recounting her story, and interpreting a few highlights of the wall. He invited us to meditative silence in the prayer circle specifically designed for that purpose and we humbly accepted. Afterward, we took our time and walked every inch of that wall, savoring the sacrifice in each stone, imagining both odysseys: that of a brave young native woman and her aged grandson who refused to let her memory die.

On the way out, we bought Mr. Hendrix’s fictionalized biographical account of Te-lah-nay’s journey, “If the Legends Fade.” He thanked us warmly and invited us to come back anytime and place a meaningful stone on the wall beside all the others—no questions asked. Mr. Hendrix’s children and grandchildren still lovingly maintain the wall and welcome visitors to walk the grounds and imbibe an incredible family story that spans almost 200 years. I know it’s a deeply personal mission for them, but I’ll always be thankful we found our way to that lovely place while Tom Hendrix was in this world to greet us.

With his recent passing, I’ve been reflecting on the motivation for Mr. Hendrix’s lifework. He spent more than a third of his allotted years on this earth building a wall, one stone at a time, as a means of honoring the courage of the dispossessed. The work of his hands is a symbol of one vulnerable woman’s defiance in the face of a powerful nation that would muster its resources to divest her of home and hope. Every stone in that wall cries out from the earth that Te-lah-nay was victorious, and history judges the Indian Removal Act as one of the most disgraceful public policies every undertaken in the name of the American people. Build your walls with sober introspection; history’s vigilant eye is on us yet.

Just as we were wrapping up our visit with Mr. Hendrix, a couple of bikers pulled up across the road. He waved hospitably and motioned for them to come on over. He seemed more fatigued than when we first arrived—he was well into his 80s at the time—but still showed the same youthful enthusiasm when the bikers approached. As they surveyed the environment in sincere astonishment, they confided that they must have driven by on the Natchez Trace a hundred times but never knew about The Wichaphi Wall until that day.

“Ah, but today,” Mr. Hendrix said with a knowing smile, “today, you found your way here.”