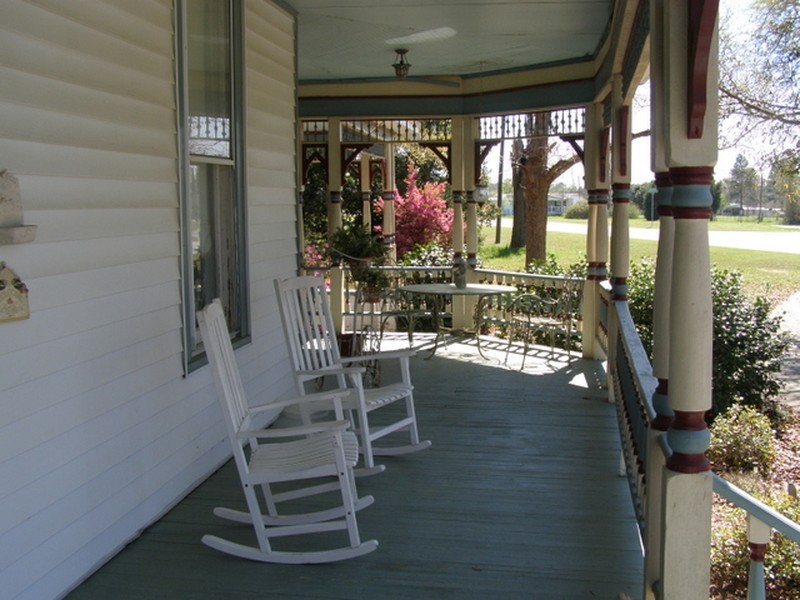 Her Room, by Niles Reddick

When I pulled into the assisted living facility, it didn’t look bad at all like I had imagined. There were a few rockers on the front porch, the clapboard house had been added on to in the back for additional rooms, and the yard was kept well. Azaleas lined the front and sides of the house and covered what blocks and bricks, that held the house off the ground, didn’t cover—pipes, bottles, cigarette butts, Twinkie wrappers, a lone rattlesnake, and trash either the wind blew underneath or what a passerby had flung under there because he was too lazy to tote it home to his own trash can or something he needed to hide like a rolling paper pack or empty Schlitz cans.

The smell of urine was strong when I opened the screened and wooden doors. An old man, a belt too long for his gaunt frame held trousers too big up for his crooked hips, just stood in the hallway frozen and held a walker. I had to walk around him and step up into a dining room with fake flowers in vases on each table. I noted a younger senior in the kitchen putting dishes away.  “Can I help you? she asked.

“First room on the front.”

I tapped lightly on the old wooden door. The door, walls, and crown molding shone coats of oil based paints through the years. If the place were a nursery, they wouldn’t pass an inspection for the lead-based paint and asbestos, but an assisted living facility didn’t have to be checked for those things.

“Coming.”  I heard slippers shuffle on the wooden floor, and the door creaked open.

“I thought I might be. I was in town and wanted to say hello.”

Aunt Doris gave me a hug and pointed, “Sit over there.”

Her room was a nice size. An old fireplace that had been sealed held a few stuffed animals on the mantle, a ceiling fan with wicker blades turned softly, and the bed was made with a patch work quilt. On one wall, a lighthouse painting sent lights to ships at sea and seemed odd some 300 miles inland. On the table next to the recliner was a bucket of crayons, a tissue box, some ointment, and an oxygen mask with a chord that dangled to a white container on the floor.

“How’re they treating you?”

“Oh, it’s fine here. I miss my house and farm, mostly my flowers and fruit trees, but I couldn’t keep it all up, and living out there all alone wasn’t a good idea anymore. Plus, I knew the kids needed the money.”

“Yes, finalized this week, as a matter of fact. Couple from Louisiana bought it. Moved all the way over here for that and didn’t hesitate to pay what they listed it for. Lord, to think we didn’t pay hardly anything for it over 50 years ago. Amazing.”

“They are all well.”

“Is your wife still teaching school?”

“No, she never taught. She worked in insurance.”

I wondered if she knew I was her nephew. After all, she hadn’t said my name. I wondered if she had me mixed up with one of the other cousins, but none of them had wives who taught. Out a front window, I noted an old convenience store and next to it a shack with a Hispanic family in the yard. The man of the house sat in a lawn chair, shirt off, pot belly displayed, and three children ran around, pushing a tire swing tied with rope to a Live Oak branch. The smallest wore a diaper and rode a tricycle up and down the sidewalk. “I hope that kid doesn’t go onto the highway,” I said.

“He won’t. He stays on the sidewalk. His dad watches him. I guess during the week when he’s working in the fields, the mother watches him. She mostly stays inside. The other two go to school and ride the bus. I’m glad they’re over there, glad these people came here to do work no one else would do.”

Aunt Doris talked about family and the weather, and I listened to her talk about her deceased siblings, her parents, and friends I didn’t even know. It was almost as if there were times when she wasn’t there, as if her reality were merging with another world, and I imagined it might soon do just that given she was in her nineties. She talked about her health, her upcoming birthday, if she made it she said, and the coming spring. After an hour, I noticed she yawned and turned her head and snored a little. I quietly got up, kissed her on the forehead, and headed out.  I dabbed the corners of my eyes as I drove out of the parking lot because I knew it was probably the last time I’d see her, given I rarely came home anymore. The approaching death of loved ones is a tough pill to swallow.

As I drove through town with the windows down, the Bonanza steak house where I’d worked in high school was now a car lot, a hotel where I worked in college was a new sushi restaurant, and a grocery store where I stole Now and Laters and my mother then made me return them had been turned into a Pentecostal church. I heard hymns being hammered out on a slightly out of tune piano, people singing, worshipping, and being thankful for the poor lives they had, and while I knew life wasn’t about my city job, how much I had financially gained in my career, my own room would be like my aunt’s room at the end. It may be in a nicer place with a view of skyscrapers, but if I looked closely, I would still see a city view of poverty, and my world would merge with another one like my aunt’s seemed to do, like all the contents in the tub coming together, swirling, and disappearing down a drain.

Born in 1964 in Valdosta, Georgia to Harold and Beverly Reddick, Niles grew up in the
small town of Hahira, Georgia with his three younger siblings–Brett, Dana, and Jared.
He graduated from Lowndes High School, where served as editor of the yearbook. He
also worked full time at Days Inn during high school as a busboy, dishwasher, cook (for
one week), and finally, hotel clerk. Prior to that, he had mowed yards for folks around
Hahira.

His latest book “Reading The Coffee Grounds” has gained much praise:

“The forty five stories in this collection are set in the Southern U.S. The terrain they cover, however, is universal. Reddick, with an acute eye for detail, depicts childhood, adolescence, young adulthood, old age and death with compassion and wry humor. Family tensions at a grandmother’s funeral, a swimming pool closing rather than admitting non-whites, and the effect of a company merger on employees are just a few of the stories in this accomplished collection that will resonate long after reading them.”

-Sandra Arnold author of A Distraction of Opposites, Tomorrow’s Empire, and Sing No Sad Songs.